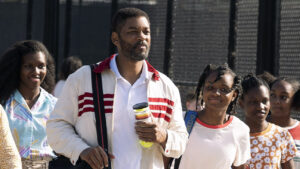 At first glance, it’s rather persnickety to give Serena and Venus Williams their biopic dues only to make the film largely about their father and his controversial process. But you can’t say a movie called King Richard doesn’t forewarn you upfront that the film isn’t so much about the legendary sisters as much as it is about the man who kept them grounded and disciplined, if at times to their own detriment.

Richard Williams (Will Smith) is seen in the very first frame of the film and is seldom absent from that point forward. We are immediately introduced to his unrivaled hustle. You needn’t say much more than he packs the family Volkswagen Bus full of tennis gear in order to fulfill the 78-page “plan” he drafted for two of his five daughters before they were even born. More than anything, Richard wants the equally prodigal Venus (Saniyya Sidney) and Serena (Demi Singleton) to have proper coaching and a great education, so they can embrace the opportunities he was denied. He foresees a sterling future for them both, even if he can’t find a tennis coach who will mentor them for free.

Soon enough, he finds the revered Rick Macci (Jon Bernthal), and the family packs up their Compton home in favor of the Sunshine State. Richard and Rick frequently butt heads over Richard’s adamant resistance to have Venus, who comes along quicker than her sister, compete in Junior competitions. He’s unnerved by the large sums of money on the line and the accelerated risk for danger. Richard makes most of the big decisions for Venus and Serena without the input of his dutiful wife, Brandi (Aunjanue Ellis), who sticks by him as mostly a silent partner until she can’t let her voice go unheard any longer.

King Richard wouldn’t be half as compelling without its slew of great performances. Will Smith is predictably great. We tend to forget that he has proven he’s reliable with treading dramatic territory (The Pursuit of Happyness, Concussion). He’s a little too thick on the Louisiana-accent, and at times feels more caricature than character. He ultimately emphasizes the wounded soul that exists underneath the bravado of an overbearing helicopter parent.

Smith is strong enough that you ultimately let the occasional hammy undertones slide in certain moments. The one that surely sticks in my mind is the moment when he clues Venus in as to why he’s been so hard on her up until this point. “I don’t want to let you down, daddy,” she tells him. “How could you, Junior?” It’s one of a few vulnerable instances Richard has in the entire film.

The other instance is thanks to Aunjanue Ellis, who I sincerely hope isn’t shafted in the praise department. Ellis is somewhat relegated to the thankless role of being an eminently supportive spouse, but she manages to succeed at transcending that archetype. Ellis shines in a scene that finally has her Brandy reading Richard the riot act, in so many words, blasting him for his prideful nature and handicapping his daughters in the process. Ellis’ gravitas recalls Viola Davis’ in Fences, when she blasts her husband (Denzel Washington) for amplifying his sacrifices without even considering her own. Both Ellis and Davis are combatting similar forces: a cocksure husband who has a knack for making every circumstance about themselves. This particular scene might not match the one in Fences, but it’s powerful no less.

Zach Baylin’s screenplay at least makes a concerted effort not to lionize Richard as the messiah of fathers determined at all costs to make his daughters superstars. It has no problem devoting long stretches that highlight his flaws, or his brash-style of parenting that silences the voices of his wife and children. But there are moments when his valiance is deservedly highlighted, particularly when a neighbor calls the police on Richard and Brandy to report their children are being mistreated. There, Smith gives the kind of monologue that wins Oscars.

This is a movie where the performances elevate familiar storytelling. While there’s nothing wrong with a movie made to inspire, the beats here are nothing you haven’t seen in the past. Director Reinaldo Marcus Green somehow manages to direct the dramatic elements with greater personality than the tennis showdowns, which feel repetitive by the 90-minute mark (in an already, slightly overlong 144 minute film). Beyond all of that, it all leads to an inevitable conclusion. We already know Richard has “the next two Michael Jordans” on his hands, and Venus and Serena will go on to be etched into the pantheon of sports legends. It’s a massive credit to Smith, Ellis, Sidney, and Singleton for keeping us engaged despite this inherent inevitability.

King Richard sadly doesn’t grant the legendary Venus and Serena their own narrative arc. You can’t blame the marketing for misconstruing that fact, but it’s no less a tad disappointing. Where Baylin again rebounds is in the film’s emphasis of discipline and family connection as takeaway themes. Discipline is one of the most underappreciated traits in a person, if for no other reason than it’s the least sexy. Think about the person who doesn’t opt for dessert. The person who knows to leave a party too early as opposed to too late. Or rather, the figure in your life who taught you to take another swing or shoot another basket when you thought you were too tired.

King Richard is a drama first and a sports movie second, and those themes prove to carry more weight than most final battles.

NOTE: King Richard is now in theaters and streaming on HBO Max until December 19th.