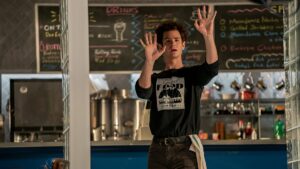 You can’t help but feel a strong sense of sadness when you read the story of composer/playwright Jonathan Larson. Larson struggled for years to get his Orwellian musical “Superbia” off the ground. A starving artist in New York waiting tables to make ends meet, he found success when he put that project to bed — after many, many disheartening rejections — and pivoted to writing and producing Rent. Larson died from an undiagnosed heart defect the day his masterpiece was set to start its preview-run off-Broadway. He was 35.

Based on Larson’s “rock monologue” that preceded it, Tick, Tick… Boom! is the biographical story (or more fittingly, struggle) of Jonathan Larson, played handsomely by Andrew Garfield. Larson becomes increasingly testy as his 30th birthday nears. He worries his moment to breakout as the next great playwright has passed him by. After all, his hero Stephen Sondheim (Bradley Whitford) had his first Broadway show at 27, so clearly something must be wrong with him.

The film, directed by Lin-Manuel Miranda, follows Larson’s pursuits to get “Superbia” off the ground after years of rewrites. Compounding the pressure is the musical theatre’s program director (Jonathan Marc Sherman) insisting he write a song for the second act, a piece of advice he ignored despite it being echoed by Sondheim himself. Like any obsessively committed creative, Larson spends long hours in his apartment fussing over his craft, much to the chagrin of his dancer girlfriend, Susan (Alexandra Shipp). His closest friend is Michael (Robin de Jesús), who left acting behind in favor of a cushy Manhattan lifestyle. The title is a reference to the clock winding down on Larson’s younger years, as if turning 30 is the ultimate time-bomb when your life-story is written in stone. For Larson, it’s the most crippling pressure.

Written by Steven Levenson (who also wrote this year’s Dear Evan Hansen, as well as the novel), Tick, Tick… Boom! has Lin-Manuel Miranda showing what it takes to make it in the Broadway stratosphere. I’ve gushed so prolifically about Miranda’s Hamilton and In the Heights big-screen adaptations and treating us with one memorable song after another that it feels strange to critique him for one that feels explicitly personal to him. While it’s not his biography, the connections aren’t hard to make. In the Heights was inspired by Rent, after all.

Tick, Tick… Boom! suffers from aggressive sentimentality and a hectic pace. Its editing muddies the inherent sense of urgency, frequently cutting to Larson’s stage-performance of the titular monologue while telling the story of what came before it. This is a film so wrapped up in haste that it loses the celebratory quality Miranda has made so inherent to his stories. The songs themselves don’t carry remotely the same magic as they did in his previous works.

The most impacting number, “Why,” is a ballad Larson writes upon Michael informing him of some devastating news, namely because it has Larson caring about someone other than himself. Larson’s passion is evident, and Garfield does a wonderful job conveying it. Still, he makes for the kind of grating character who must circumvent everything back to himself. Now, he’s far less toxic and unlikable than, say, Evan Hansen, but so are most of us. Because the movie is so entrenched in Larson’s story, it leaves little room for the perspective of others. Shipp is lovely as Susan, but she’s relegated to the woman supporting her tireless boyfriend.

This is where I wonder if the urgency offered by the stage is most conducive to this breed of storytelling. There’s so much style overtaking Miranda’s adaptation that it’s easy to get lost in the frenetic pacing. It’s when Levenson slows the movie down that strong moments arise. Consider when Larson’s electricity is turned off. “You don’t understand! I have a workshop!,” he screams to the electric company on the phone. Levenson wisely doesn’t play the scene for laughs. It’s a despondent sight, a desperate Larson alone in his apartment forced to do nothing but fear his one and only shot is slipping away with little he can do to stop it.

For as much as Tick, Tick… Boom! commends theater students for their unbridled passion, it also highlights that a breather from those types is necessary for the sanity of those who don’t belong in such a club.