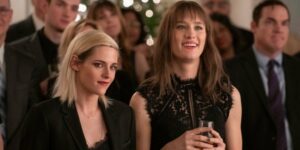 Happiest Season is one of those films that would be over in 20 minutes if everyone just sat down and had an open conversation with each other. Despite that, it’s a wholesome holiday ensemble where every member of the cast is permitted to shine. With the deluge of cookie-cutter holiday films churned out from the Hallmark Christmas movie industrial complex each year, it’s pleasant happenstance when we get a film that’s both humanistic and cognizant of the queer experience during the holidays.

The film revolves around a journalist named Harper (Mackenzie Davis, Tully), who has been in a relationship with Abby (Kristen Stewart), a grad student, for over a year. With the holidays approaching, and knowing Abby associates the time of year with her parents, who died a decade earlier, Harper impulsively invites her to spend Christmas with her family. Abby sees this as an opportunity to propose to Harper on Christmas Day after asking Harper’s father for his blessing.

Harper makes an attempt to retract the invitation the following morning, but Abby is too committed to say no. Not until they are near Harper’s parents’ house does she tell Abby that she hasn’t come out to her conservative family yet, meaning Abby must play the thankless role of Harper’s orphaned roommate to her girlfriend’s closest kin.

About Harper’s family: it’s one of those families who has a meticulously decorated home and the aesthetic presentation of a reality TV show household that almost effectively masks the drama beneath the surface. Harper’s visit home reminds her of the ultra-competitive relationship she has with her sisters, Sloane (Alison Brie) and Jane (Mary Holland, who serves as co-writer with director Clea DuVall) — a dynamic subtly encouraged by their parents (Mary Steenburgen and Victor Garber). Furthermore, things get hairy when Harper spends time with her high school boyfriend Connor (Jake McDorman) while Abby links up with Harper’s other ex, Riley (Aubrey Plaza), and learns about the perils of their problematic relationship. Sloane eventually discovers Harper’s secret, which adds to the already looming tension in a crowded household.

DuVall and Holland make sure everyone is given the right beats to feel like actual characters. Steenburgen is quietly funny as the mother who strives for family gatherings that will look nice on her Instagram profile, while Brie is enjoyable to watch as the icy sister harboring her own secret from the family. Holland’s Jane might as well be Jan from The Brady Bunch, or Meg from Family Guy, but she gets laughs as the perpetually underestimated black sheep of the house. With that, the enigmatic Aubrey Plaza is granted perhaps the most enjoyable bit of the film in a scene that has her singing along to “Must be Santa Claus” in a packed bar. Both her and Dan Levy — playing Abby’s closest confident — have that unique comic ability to be the rational voice of reason while also using their terrific comedic talents to evoke humor with their passing commentary. “Ask her dad for his blessing?,” Levy’s John asks Abby when she tells him her plans to propose to Harper. “Way to stick it to the patriarchy!”

Frankly, Harper isn’t the most likable character on the face of the Earth. She’s a product of a conceded, picture-perfect family, and she evidently lost her ability to put personal happiness over perceived family contentment many moons ago. It’s not the fact she chooses to remain in the closet, but how she cruelly shoves Abby back into the oppressive space that leaves us uneasy. Mackenzie Davis thankfully saves her from being a monster, primarily in scenes with Abby that remind us what her girlfriend sees in her.

The element that will likely endear Happiest Season to many in the LGBT community is its acknowledgment of identity and personal politics as crucial themes into the story. This isn’t the case of a film taking the blueprint of a heteronormative holiday film and cut-and-pasting gay characters and allowing formula to takeover from there. DuVall and Holland craft a sensitive picture by being aware of the troublesome position in which both Harper and Abby function throughout much of the film. It’s a cut above much of the standard-fare you’re liable to see this or any other year, and it’s a lovely showcase for all involved.

NOTE: Happiest Season is available to stream on Hulu.