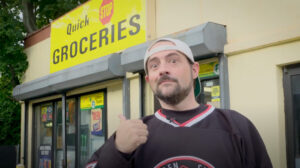 I’m not quite sure I’d be reviewing movies if I didn’t see Clerks at a way-too-young age. I was eight-years-old when I first watched it on a VHS tape my uncle loaned me before truly thinking through his decision. While the film wouldn’t speak to me on the deeply personal level it would in future years, it showed me that cinema didn’t have to be “big.” Two slackers wasting away behind the desk of a convenient store could be a wildly entertaining movie. It was all about detailed character types and wit. It helped me learn a good movie can stem from virtually anything.

Millions like myself have a story about how Kevin Smith entered our lives from afar. He remains one of the filmmakers about whom I’m most passionate. Even as the quality of his works has declined in recent years, that’s besides the larger point. The treat has always been quite simple. Smith is a wholesome comic-book nerd whose metamorphosis led him to becoming an aspirational figure with a big heart, a beautiful family, and a propensity to elevate his friends and their like-minded love for entertainment.

The documentary Clerk is as loving a tribute to Kevin Smith as Smith himself is as loving to those who made it possible for him to “be himself for a living.” The intimate documentary, helmed by frequent Smith collaborator/guest podcast host, Malcolm Ingram, features Smith’s mother Grace, his brother Donald, his wife Jennifer, his daughter Harley Quinn, and his slew of colleagues discussing his unlikely rise as a folkloric figure for movie-lovers, comic book fans, and everyone in between.

This includes a chronological recap of his filmography, which of course began with Clerks in 1994. A festival darling that saw a quick acquisition (and ensuing partnership) with Miramax, it would be one of the defining films of a generation, resting comfortably alongside Richard Linklater’s Slacker — with Texas-native Linklater popping up in an Astros jersey to express his fondness for Smith. Then came Mallrats, which was met with significantly less critical adulation until Chasing Amy would release in 1997, catapulting the careers of Ben Affleck, Jason Lee, and Joey Lauren Adams in one fell swoop. Who can forget Dogma, which features George Carlin as a Cardinal and Alanis Morissette as God herself? You know the rest.

For all intents and purposes, Clerk provides a familiar but favorable overview of Smith’s career. You come for the expected movie-clips but you stay to be reminded how Smith was a pioneering force in contemporary independent American cinema. In a larger sense, you realize he was also someone who would inadvertently lay the groundwork for what nerd culture would eventually become. Comic book properties and fans fawning over them while figuring out their own lives is a focal point of American cinema.

Some might be surprised to learn that Clerks II is Smith’s favorite film. You come to realize, however, he’s speaking largely from a production standpoint, which was a “gang getting back together” setting for him, the inimitable Jason Mewes, and co-stars Brian O’Halloran and Jeff Anderson alike. He recalls the pivotal moment in the film where Dante and Randal are in jail and Randal nearly cries after imploring Dante to buy/reopen the burned-down Quick Stop to preserve their friendship. To Smith, that was the moment he essentially told himself to be himself. “Buying the Quick Stop” was what he metaphorically did.

“The only reason you liked me in the first place was because I was me,” Smith says, tearfully. “So, I’m gonna go and be me for the rest of my life.”

Holding back Clerk on a technical aspect is the editing, which is a little strange, especially in the first 30 minutes. One sequence of cuts interrupts any continuity. Smith goes from driving through his home-state of New Jersey, to speaking directly to the camera alongside his mother, and then speaking again, only this time by his lonesome. We all know Smith loves to talk, and Ingram’s access is as good as anyone’s. I don’t envy the editor, Sean Stanley, however.

Clerk‘s broader appeal is probably thin as well. Like an episode of Smith and Scott Mosier’s long-running SModcast, or one of his four-hour Q&A DVDs, Ingram’s documentary is meant for View Askew zealots. It does a fine job at being all-encompassing, addressing everything you can think of: his films, Jay and Silent Bob’s Secret Stash, his near-fatal heart attack in 2018, and the View Askew Street Hockey League (VASHL), a street hockey club featuring 13 teams comprised of Smith loyalists.

The most humorous detail is the fact that the most comprehensive Kevin Smith documentary we’ll likely ever see spends a whole 40 seconds on the Bruce Willis/Tracy Morgan disaster Cop Out. Even for Smith, sometimes, albeit rarely, less is more.