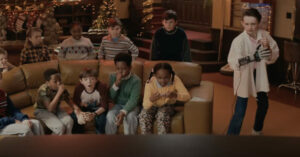 I need to begin by giving a shoutout to screenwriter Kevin Jakubowski, native to the beautiful town of Batavia, Illinois. I knew the screenwriter of 8-Bit Christmas had to be an Illinoisan before I even reached the halfway point. Besides the Polish surname, one just doesn’t namedrop the grocery store Jewel, make fun of Wisconsin drivers, highlight Blackhawks radio, and litter a movie with Bears colors unless they’ve breathed that air. He turns the frosty wintertime setting of Chicago into its own character full of personality.

From a fellow Chicago-suburb-dwelling Polak, I salute you, Kevin.

Adapted from Jakubowski’s book of the same name, 8-Bit Christmas begins with Jake Doyle (Neil Patrick Harris) and his daughter (Sophia Reid-Gantzert) Christmas shopping in Chicago. She’s begging dad for her own cell-phone, which prompts Jake to tell her a story. The two arrive at his parents’ house, sit down and play Paperboy on Jake’s old Nintendo Entertainment System, and he tells the story of Christmas in Batavia, circa 1988, when all he wanted was that very game console.

The seeds were planted in the minds of 11-year-old Jake (played by Winslow Fegley) and his many friends during that faithful winter. They would flock to a local rich kid’s house for the chance to play his NES and take advantage of his wealthy parents’ resources. After one visit, nothing else matters. Jake and his friends — including the likable sidekicks, Trotter (Che Tafari), twins Tammy and Teddy (real-life twins Brielle and Braelyn Rankins), and the pathological liar Jeff Farmer (Max Malas) — become committed to getting the endearingly popular 8-bit video game console for Christmas. The only thing that stands in Jake’s way is his parents (June Diane Raphael and Steve Zahn), who, like many parents in the era, believe video games cause more harm than good.

8-Bit Christmas recognizes that staking its humor on callbacks to Nintendo is a losing battle in the long-run. Make no mistake: there are still sequences involving the heavily flawed Power Glove and the allure of groundbreaking side-scrolling technology. Unlike The Wizard, the film doesn’t live and die by the attractiveness of the NES. Jakubowski’s script is at its most fun when it involves the kids trying to secure the game console.

Although the kids selling wreaths as part of a school fundraiser will undoubtedly bring back memories to all those holiday candles and knick-knacks we sold growing up, director Michael Dowse (Goon, Take Me Home Tonight) and Jakubowski hit a home-run with the field-trip sequence, which involves Jake trying to snag the NES at the mall while his pals create a diversion. The scene conveys the real treat of the holidays: time with friends, a plan that “can’t possibly fail,” and the adventure that winds up being better than, say, playing a primitive console.

Just when 8-Bit Christmas can get a little too childish for its own good (too many juvenile “dog poop” jokes, for one), it hits you with an appropriately sentimental climax, which is understated yet heartfelt. You couldn’t write this story as affectionately if you didn’t live it or lived something like it. It’s always precarious to make a movie erected on nostalgia — 80s nostalgia, no less — but in working off of A Christmas Story‘s formula as opposed to marrying itself to it, Dowse and Jakubowski make a movie that’s both touching — and most importantly, quintessentially Chicago.