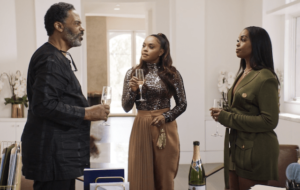 Just how predictable is Jamal Hill’s A Holiday Chance? More than just predicated on the most pat themes imaginable — “giving is better than receiving,” “family is forever,” and “be true to yourself” — the film ends with the song “We Are Family.” Well, if this isn’t the Hallmark holiday movie that could…inexplicably find its way into theaters.

I’m well aware that there is a rather large group of people who relish in this breed of movie year-after-year. I have some of those very same people in my life. I can understand the warmth brought on by the general, genial atmosphere of Christmas movies, but in the same way I don’t praise movies for simply adhering to diverse casting, I also don’t praise movies for incorporating “the most wonderful time of the year” as if that checks any kind of box pertinent to quality. The cast of A Holiday Chance is so uniformly smiley and attractive that it’s hard to come down on it, for it’s not offensively bad. Maybe worse, however, it’s offensively bland.

Hill’s film revolves around a wealthy African-American family. They’ve risen from the ground up by way of father Garvin Chance’s (Richard Lawson) multi-million dollar film production company. Garvin’s youngest daughter, Noel (Nafessa Williams), is the VP of the company, while her elder sister, Naomi (Sharon Leal), has a rocky marriage with her loving husband (Amin Joseph) and a poor daughter who says maybe two sentences throughout the film. Noel and Naomi have struggled to get along over the years. Noel is the unapologetic workaholic while Naomi conceives multiple ways to spend money.

When Garvin passes, the family discovers the production company is saddled with debt due to various flops. He’s also left control of it to Noel and Naomi. Noel comes up with a thoughtful plan to redirect the company towards a subscription-based streaming service in efforts to address consumer demands of episodic content.

Oh, the irony. Someone should’ve told Imani Media Group and Faith Media Distribution that A Holiday Chance is tailormade for a VOD release as opposed to playing presumably in a lot of empty auditoriums over Thanksgiving weekend.

You learn all you need to know about the quality of Curtis Bryant’s screenplay within the first few minutes. Noel is telling her father it’s time to take the company “to the next level” and that they could take things from “0 to 100” in no time. The characters ostensibly find it downright impossible not to speak in broad generalizations, and deliver life-lessons we’ve heard ad nauseum as if they’re providing nuggets of never-before-uttered wisdom.

The problem isn’t so much Williams, Leal, or even Vanessa Bell Calloway, who plays their mother, Sheryl. The problem is the script being as cookie-cutter as possible. The characters are archetypes with no room for nuance: you have the capable sister, the lazy sister, the mother who enjoys spending the family money by the thousands, the stern father, the obligatory boyfriend, the unappreciated husband, and a litany of background actors who show up at the Chance’s many holiday parties but aren’t humanized whatsoever. Throw them into a production that looks so sterling clean and antiseptic — directed with pedestrian-level stiffness from Hill — and you have all the makings of a 102 minute soap-opera that you shouldn’t have to pay $10+ to see.

NOTE: A Holiday Chance is now playing exclusively in theaters.