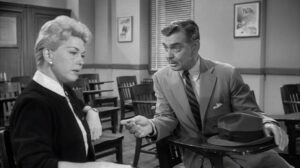 NOTE: I’ve committed to watching and reviewing a Clark Gable film every Monday for the remainder of 2021.

While devout readers know I’m a sucker for movies that draw attention to the culture of newspapermen and the journalistic process, George Seaton’s Teacher’s Pet has more going for it than just those elements. Here’s a comedy-drama that’s a credit to both genres. It presents bitingly funny sequences, drama that humanizes folks of opposite classes, and a brewing romance that’s equal parts smite and deep-seated admiration. It manages all of this dutifully while showing an impending new era for journalism and journalists, which would take hold in the subsequent decade and continue up until the age of technology.

The story revolves around James Gannon (Clark Gable), the city editor for a large newspaper who holds his lack of education beyond the 8th grade as a badge of honor. Nevermind the grit and grind it took him to get where he is today. He believes that frontline experience is the only education one needs, and he harbors little respect for even the most renowned college journalism programs. Irate that his superior has ordered him to speak at a night-school class, he decides rather impulsively to play a little game. He writes a scathing letter to the class’ instructor, Erica Stone (Doris Day), before attending the lecture.

Erica starts class by reading and lambasting Gannon’s letter as the work of a stuffy, whiskey-guzzling codger who is the last amongst a dying breed of hard-nosed journalistic gatekeepers who treat the profession like a trade. It’s during these moments where Erica rattles off her criticisms towards Gannon that he — like any handsome middle-aged man in a black-and-white picture — finds himself smitten by her intellect. He continues to join the class under the name “John Gallagher.” In no time, he wows her with his “amateur” lede-writing skills and impeccable ability to provide journalism’s six answers so succinctly.

Enter Dr. Hugo Pine (Gig Young). A friend of Erica’s, he’s a dashing, worldly psychologist. Note the PhD certification too. An uproariously fun sequence involves Gannon and his fling, Peggy (Mamie Van Doren), “running into” Erica and Hugo on their date at one of those swanky nightclubs. Hugo is a charmer even to caddish individuals like Gannon. As Gannon initiates his move to humiliate Hugo, Peggy’s song-and-dance number begins. “You’ve heard of instant coffee/you’ve heard of instant tea/see here, you guys, just feast your eyes on little ol’ instant me,” she sings so ravishingly as her hips do an equal amount of talking. Gable’s expressions are only as amusing as the sudden head-cocks he makes to the tune of the band.

Later that evening at Erica’s pad, she makes a pot of instant coffee, which prompts her to mimic the sultry song-and-dance. As if Gannon wasn’t already wooed. In those moments, both Day and her character remind us that they can do more than compete with the young dames. They can outdo them with experience.

Maybe the balanced dynamics of Gannon and Erica are due to the fact that the writing team of Fay and Michael Kanin had already been married for nearly 20 years at the time this film was conceived. The two do a wonderful job of having the co-leads toss the invisible power-stick back and forth. They also dazzle with their ability to so seamlessly connect scenes and allow the synergy to carry onto the next setting.

Whether he realized it or not — as a clearly aging Gable would pass just two years after the release of Teacher’s Pet, at the age of 59 — the film feels eminently personal. The character of James Gannon is burdened by challenges in nearly every scene. Sometimes, he’s answering questions about a particular news story. Other times, he’s barking orders at the younger bucks trying not to botch their first big gig. Quite frequently, as he spends more time with Erica, he starts to question his own place in the world. He sees her classroom filled with journalist upstarts, some young, some old, all getting a crash-course on material he had to learn the hard way. But did the hard way teach him the right way? A credible way, even? Suddenly, he’s not so sure. His uncertainty bothers him to the point that him being bothered by it greatly bothers him.

Further credit is due to the Kanins for their even-handling of the film’s tricky third act. Sure, there’s the budding courtship, but also present is the potential for James Gannon to grow into a more well-rounded character. Not only does he mature, his maturation is what leads him into the arms of Erica. His own attempt at besting the education system results in him initially questioning if he has any real knowledge at all. It’s Hugo who helps him realize that knowledge is accrued in many forms. After some self-pitying, Gannon is humbled, no longer the arrogant man he was when we initially met him (maybe a touch aloof, but more malleable than before). The lines of dialog about how the book-smart and the street-smart are both capable of being gifted in their own ways is an added bonus.

Ultimately, Teacher’s Pet is a movie about the changing of the guards. When a new breed of college-educated men and women were being molded into replacing the old-dog, masculine way of thinking. Such an angle adds greater relevance to a story that is a cut-above another insular rom-com.

NOTE: Teacher’s Pet is available to rent on multiple platforms, including Amazon, Vudu, and YouTube.