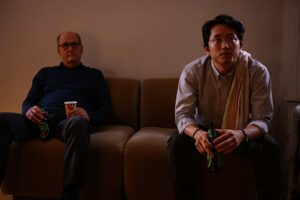 Darkness falls on your average high-rise apartment complex in lower Manhattan. The adobe in which Stephen Karam’s The Humans focuses belongs to Brigid Blake (Beanie Feldstein), who is so freshly moved-in with her boyfriend Richard (Stephen Yeun) that the apartment walls are still blank and the pad mostly lacks furniture. Nevertheless, Brigid has insisted on having her Pennsylvanian family over for dinner. Enter father Erik (Richard Jenkins), mother Deirdre (Jayne Houdyshell), older sister Aimee (Amy Schumer), and grandma Momo (June Squibb), who is suffering from dementia.

There is palpable tension from the jump, and not for the reason you might think. Yes, Richard is Korean, but this story isn’t necessarily about who’s coming to dinner. Adapted from Karam’s Tony-winning play, The Humans has a lot on its mind: internalized traumas, frosty family dynamics, the economy of trying to stay afloat, and our favorite… existential dread! To say it nails each one is a reach, especially given the relatively short runtime.

What it does do is compile a handful of strong moments into a drama that masquerades as a horror film. Consider Aimee, who like her sister, is on thin ice with her parents despite being able to conceal it better than her younger sibling. Aimee has recently broken up with her girlfriend, has ulcerative colitis, is informed early on that she’ll be without a job soon enough, and the cherry on the crap sundae is her mother keeps emailing her articles about all the horrific crimes committed against lesbians. One of the film’s most piercingly realistic moments comes when Aimee phones her ex. She hangs up bawling, and there stands Erik, who is not the emotionally supportive father, if you catch my drift. He expresses all the typical niceties a parent should say in this situation — “you’ll find someone new,” “you’ll come out of this stronger” — but Aimee tells him to stop. So, Erik shuts up. “Don’t actually stop,” Aimee responds after several seconds of silence.

We all tell white-lies in our day-to-day lives, but none greater than “I’m fine.”

Speaking of Erik, he’s hiding his own secret, evident by his disturbed facial expressions and perpetual shiftiness. He’s also terribly cruel to his wife in that contemptibly passive-aggressive way. He makes hurtful remarks about her inability to resist sweets. He brings her to tears thanks to his lack of gratefulness. There’s a lot boiling under the surface that’s all revealed in due time. It’s in the way the information is revealed and the situations that precede it that make The Humans so watchable.

I won’t pretend this setup in itself isn’t familiar-fare, but Karam and cinematographer Lol Crawley (who worked Southern Gothic magic last year with The Devil All the Time) have a way of telling this story uniquely from a visual standpoint. The camera is often parked at a distance from the action, so we see it unfold through doorways or narrow passages from which characters enter-and-exit our view. It’s not too dissimilar from Kenneth Branagh’s recently released Belfast, although the technique isn’t as justifiable here. In Belfast, we are witnessing things from the perspective of a toddler, whereas here, we’re sometimes kept far enough away from the action that the dialog is at whisper-level. I wanted to be more of a fly on the wall. At times, it feels like unnecessary style — the kind A24 films have employed long enough for which to become parodied.

Even so, the moodiness of the cold apartment complex becomes entrapping. The shadows contribute to a larger, unseen horror. Just when you think you have this plot figured out, a curveball is thrown. Crawley keeps things visually astute.

It helps that everyone brings their A-game in playing a crop of characters who leave just as much unsaid. Beanie Feldstein is quickly becoming an actress so good, I’d prioritize watching her if she opted to do Mesothelioma class-action ads. She oscillates between perky, patronized, hurt, and agitated all while her Brigid simply tries to prepare a fine dinner with her boyfriend, Speaking of him, Steven Yeun continues his ascent that knows no peak. He’s the classic everyman caught in the middle of a family long overdue for a much-needed, all-hands-on-deck argument that’s yet to happen. Furthermore, few actresses have shown such range over the last several years and have simultaneously gotten little credit. Put some respect on Amy Schumer.

The Humans opts to be significant in a larger, cosmic sense insofar that one of its many takeaways comes to be how the universe acts against us in so many ways that sometimes all you can do is be appreciative of the simple gatherings that allow you to take your mind off such a notion. It plays ball with horror elements I’m not quite sure are employed to the desired effects with a climax that’s rooted in tormented religiosity. For the previous 90 minutes, the film is an uncomfortable dive into family drama before it tries to do a lot too quickly in the final ten. Despite this, thanks to its deep fixation on character and emphasis on conversational beats, it’s the kind of movie I never tire of seeing.

NOTE: The Humans is now playing on the Showtime app, which is available ala carte and via Amazon, Hulu, and a variety of other platforms.