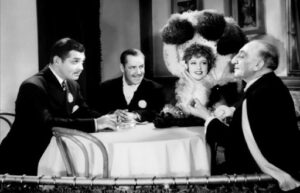 Before there was James Cameron’s Titanic, there was W. S. Van Dyke’s San Francisco. While not the inaugural entry in the melodrama-meets-tragedy genre of cinema, it’s a foundational work no less. From the opening title cards, Van Dyke and screenwriters Robert E. Hopkins and Anita Loos announce they’re building to April 18, 1906, the day a 7.9 (moment magnitude) earthquake killed thousands and nearly destroyed the entirety of San Francisco (nearly 80% of the city had to be rebuilt). Cinema was in its infancy when that tragedy occurred, so it ultimately took 30 years for a film about that tragedy to come to fruition.

Consider too that Saved from the Titanic — the first movie about the sinking of the Titanic — not only came a year after the actual event in 1911, but also starred Dorothy Gibson, a real-life survivor. The film is tragically lost, but it almost makes you wonder why Hollywood waited so long to dramatize this particular catastrophe.

We’ll get to the ensuing tragedy in a moment. The film is mostly a romance, set in the Barbary Coast. Trying to take a bite out of a land full of green is Mary Blake (Jeanette MacDonald), a gifted soprano singer who simply wants to be both famous and respected in the opera world. She sees an opportunity come her way when she’s offered the luxury of performing at the Tivoli Opera House. The problem is that she has signed an exclusive rights contract with Blackie Norton (Clark Gable), the owner/operator of a Barbary Coast dance-hall that, as lucrative as it is, isn’t quite the “respectable” joint Mary sees herself at long-term. Blackie’s lifelong best friend is a hard-nosed priest named Father Tim (Spencer Tracy), who describes him with one of the film’s best lines: “he is as unscrupulous with women as he is ruthless with men.”

Friction develops between Blackie and Father Tim after Blackie tries to recruit Mary by dangling $75/a week in front of her, therein making her the headliner at his venue. Mary later becomes infatuated with another hotshot named Jack Burley (Jack Holt), who sparks a love triangle much to the chagrin of Blackie.

San Francisco‘s final 30 minutes is simultaneously its best attribute and its worst. You know tragedy is coming, but in order to witness the technical prowess and emotional overload, you need to sit through a lot of turgid drama in order to arrive at the riveting climax. It’s not that Hopkins and Loos have conceived a bad setup as much as one that runs out of gas well-before we reach the point for which we’re all waiting.

But when it comes, holy hell does it arrive. Maybe most shocking is the fact that Van Dyke doesn’t shy away from showing a child being crushed by debris, or a woman witnessing her apartment wall falling forward, only for her to do the same. In a fashion that would make Sergei Eisenstein smile, mass destruction occurs in two briskly paced minutes. Van Dyke’s coverage remains as clear as it is heartbreakingly real. Like Cameron’s epic that would follow 61 years later, it’s the kind of carnage we anticipate, only this time we had to wade through a rather uninteresting romance in order to arrive there.

San Francisco‘s final 20 minutes revolve around a battered, bloodied Blackie searching for Mary in the rubble. Gable gives the kind of performance that makes Hollywood legends, humbled and without words to describe what he’s witnessed. His ability to play charismatic yet smug is still unrivaled, and he ultimately buoys much of the flab on a movie that is remembered for what is promised beyond what could’ve ultimately elevated it into classic status.