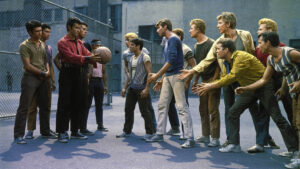 Film critic Roger Ebert brings up a fascinating point in his review of West Side Story, which was written as part of his “Great Movies” series highlighting films indispensable to cinema. In addition to being more critical than normal with films under this umbrella, he states how the acclaimed musical feels less embraced by movie lovers than, say, Singin’ in the Rain or An American in Paris.

By comparison, West Side Story is canonical because it’s regarded that way by institutions like the Academy — which granted it 10 Oscars, including Best Picture — and AFI moreso than the general public.

He’s onto something here. It’s a musical I’d argue is more memorable for its incredible choreography than the songs themselves. Moreover, its Civil Rights-era message of inclusivity along with its portrayal of street-gangs is quintessential liberal idealism; the kind of depiction that that only exists in Hollywood movies and prompts us to think “if only real-life thugs were this personable.” Even for a musical dealing with the subject of gang warfare, it’s remarkably neutered, save for the famous scene where Rita Moreno’s Anita is nearly raped by the Jets in Doc’s Candy Store.

A moment of honest reflection occurs in the aftermath, when Ned Glass’ Doc — a character who serves as the voice of the audience — accosts the Jets by saying they’re “what makes this world lousy.” If used earlier, the line might not have had much relevance, least of all to those on the receiving end. How it’s delivered — and more importantly when — is what gives it tremendous impact.

You need not look too closely at West Side Story to make one claim: this was Hollywood trying to preserve the Old Hollywood filmmaking style despite being populated by youngbloods ready for a new frontier. French New Wave was heating up with Jean-Luc Godard’s Breathless subverting all conventional film language. Federico Fellini’s La Dolce Vita came out the same year. Hollywood needed its lasting contribution, and they achieved it with West Side Story with its saturated Technicolor, unmistakably American setting, balletic choreography, Shakespearean influence, and songs penned by one of the greatest lyricists in Stephen Sondheim.

West Side Story‘s expository scenes were directed by Robert Wise, editor of Citizen Kane and director of The Sound of Music. Wise and cinematographer Daniel L. Fapp (who would go on to do The Great Escape two years later) robustly capture the essence of New York City in one of the most impressive examples of locational directing in that or any other era. It’s Jerome Robbins who plotted and shot the dance choreography, at least until he was fired when the production ended up almost a month behind schedule. Despite his dismissal, the choreography was unchanged and his credit on the project remained (he was even honored by the Academy the night the film nearly managed to turn 10 of its 11 nominations into wins).

Given its status, I don’t feel like I need to spend a great deal of time on the plot. You’re most likely aware of it being lifted from Romeo & Juliet, as it makes star-crossed lovers out of Natalie Wood’s Maria and Richard Beymer’s Tony. Tony is the co-founder of the Jets, who decides to throw away the last remnants of his gang affiliation for a woman whose older brother, Bernardo (George Chakiris), is the leader of the rival Sharks. Oddly enough, the romance between Moreno’s Anita and Chakiris’ Bernardo finds itself usurping Maria and Tony’s internally controversial union. Moreno’s mix of passion in her performance and physicality in her song-and-dance routines manage to eclipse Wood, who is bland in her every-girl nature by comparison.

The movie’s use of brown face complicates beyond whatever you make of the contemporary optics. While the Jets seem to be devoid of any defined ethnic background, the discourse has seemingly subscribed Italian heritage to them, only heightened by their (generally speaking) darker complexions. In conjunction with the use of brown face for the Puerto Rican characters, I found myself at times struggling to differentiate the two groups. For a movie brave enough to include such lines as “Life is all right in America / If you’re all white in America,” it’s a wonder why actual Puerto Ricans weren’t ultimately cast. Yes, we know why, but still.

The aforementioned lyric is lifted from “America,” one of the many foot-tapping songs to be featured in West Side Story. I opine “Gee, Officer Krupke” is the number most complete. In retaliation to a local, ball-busting cop, the Jets sing about their plights that is meant to snidely justify their gangbanger nature. “Our mothers all are junkies / Our fathers all are drunks / Golly Moses, naturally we’re punks!” The ensuing dance number is one of several that show just how grueling and demanding Robbins’ choreography was. It’s hard enough to get a crop of individuals to dance in unison, but throw on the physical nature of so many of these numbers — including one scene that has several characters scaling a chain-link fence and landing on the opposite side, all timed to the tempo — and it’s lucky walkouts didn’t occur. Thankfully so because the end result is fiercely watchable. There’s real reason why this is considered one of, if not the best filmed musical ever.

I still have trouble wrapping my mind around the fact that countless Americans not only flocked to the theater to see a musical about violence, racial prejudice, and rape all captured in traditional style, much less bought the soundtrack that openly called out a country’s biases so deeply ingrained in the fabric of a nation. A lion’s weight of this film’s success is due to Robbins’, whose steadfast commitment to making the choreography painstaking in its many motions and timing proved anything but pyrrhic, even if it did cost him his job. While a bit more challenging to embrace as easily as musicals of previous decades, West Side Story is lovingly made and worth preserving as more than just a touchstone of the 1960s. It’s a testament to the aesthetic beauty of Old Hollywood and a credit to making sure musicals remain a style that’s enduringly popular in the present.