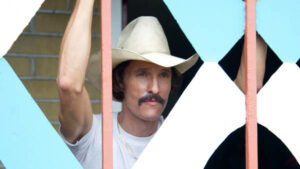 Dallas Buyers Club tells a classic anti-hero story concerning an ailing, homophobic bull rider who tests HIV positive upon visiting a doctor. He is told he has a mere thirty days to live. As expected, he brushes off the doctors warnings about being deathly sick, saying it’s impossible for him to be ill because he is no “daisy-puller” and is straight as an arrow.

However, this stubborn arrogance will be both his drawback and, ultimately, his method for success. He becomes desperate, paranoid, and deeply self-conscious, making the decision to travel to Mexico to obtain a series off unapproved Food and Drug Administration (FDA) drugs that he read about online. It’s the 1980’s, the HIV/AIDS scare is hugely prominent in pop culture, and FDA approved drugs seem to be doing more harm than good. Our anti-hero plans to show the public they’re being poisoned, cheated, and lied to by an agency driven by profits and not the greater good of the American people.

Our anti-hero is Ron Woodroof, played, once again, by a stellar Matthew McConaughey, who has finally earned enough money where he can partake in films with ambition and a fabulous storyline (kind of like the opposite of Robert De Niro). This is only McConaughey’s umpteenth venture into bonafide, working class, trailer park culture, with such winners as Bernie Killer Joe, and Mud already firmly secured under his belt. Once more, he gives a beautiful performance as an unlikable character doing unlikeable things, however, making us still appreciate and root for him in the end. He is assisted by the likes of a transgender female (Jared Leto, in perhaps the riskiest role of his career) and viewed uncertainly by his physician (Jennifer Garner), who is conflicted whether or not to allow him the luxury of running a buyers club, providing people with unapproved but helpful drugs, or to keep patients coming back to her hospital to provide them with sub-par care and assistance.

The writing team of Craig Borten and Melisa Wallack rarely take a wrong step in portraying Woodroof as a contemptible, but admirable man hungry for life, not survival. In order to do this well, they downplay all emotional significance in the film to vague hints the audience can take either way. Some scenes, we could definitely believe Woodroof is beginning to have feelings for his transgender partner. At other times, we can maybe sense a potential relationship between him and his physician. But Borten and Wallack have bigger fish to fry in a story with much more to it than a schmaltzy love story.

Politically, the film can be analyzed both ways. We can see that the aforementioned writing team and the directing talents of Jean-Marc Vallée may be trying to promote alternative medicine in America – a case which definitely needs to be made, and only makes more sense as we see its significance in the 1980’s. In a country driven more by pharmaceutical sales than ever before, the case should be made for several kinds of alternative medicine, and having Woodroof’s story portrayed on film is liable to spark conversation and even a debate about the benefits and the need for other options.

A scene in Dallas Buyers Club explains why this was tricky then and is even more tricky now, with corporate profits being at the forefront of concerns most of the time. Woodroof storms in on an HIV support group meeting, hooked up to an IV on wheels, when an agent of the FDA is speaking at the seminar. He states how these big, government-controlled corporations keep the real, beneficial drugs closeted and the research that proves their reliability hidden and instead approve drugs that act either as placebos or as weak solutions to a macro-problem. As expected, Woodroof is thrown out after less than a minute of sensible ranting, and this marks one of the many scenes in the film that will spark outrage and disgust amongst audience members.

Dallas Buyers Club, thankfully, has numerous people behind it that takes its material seriously and see the wealth of social commentary the screenplay provides. Between a fearless and completely believable McConaughey as the lead, to Jared Leto’s sensitive and heartbreaking performance as a man already ostracized in society with additional huge problems, the talents writing team, the equally intelligent director, and the softly-colored visual palette of colors, the film succeeds on nearly every level in terms of a biographical piece, an interesting drama, and, once more, the story of an anti-hero we simultaneously love and hate. The film’s trailer included an amazing song by the band The Heavy titled “What Makes a Good Man?” and I simply can’t think of a better song to summarize this movie’s subject matter and greatness in terms of intimate focus on a character with a poor personality but a strong mentality.