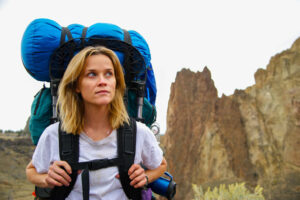 In 1995, a woman in her early thirties by the name of Cheryl Strayed decided to cleanse her soul and rid herself of personal grief, sadness, and unhealthy demons by hiking over one-thousand miles along the Pacific Crest Trail by herself. The journey was a singular testament to freeing oneself from both unhealthy albatrosses and mental weight in order to not only be one with the land she was living off, but hopefully provide her with the perspective of the beauties of nature and such while living amongst it. Cheryl, who changed her last name to “Strayed” as a symbolic gesture, had a lot on her plate, and hiked with the thoughts of her recent divorce, the death of her mother, her drug addiction, and her overall downward spiral circling her mind. Just two of those things would be enough to cripple a person’s psyche, or even drive them to suicide, but Cheryl takes arguably the most peaceful and assured way to deal with such feelings.

Strayed’s story of personal strength and the test of one’s grit and motivation just lend themselves to film, which is why there is Jean-Marc Vallée’s Wild, a film that attempts to capture the event and provide us with backstory of Strayed’s life in flashback. I just wrote my review for The Imitation Game, and talked about how that film almost gets by entirely on the talent and merit of its lead actor Benedict Cumberbatch; the same goes for Wild, which has Reese Witherspoon playing Strayed in one of the most exhausting performances of her career. Witherspoon’s character is put through so much in the film, from long nights high off of heroin, to somebody’s overnight sex toy, and let’s not forget the 1,100 mile trek she just committed to. She has to do so much with her character, and never does she miss a beat, effectively presenting us with a character we can love and root for at times and quietly detest at others because of the negative way she treats herself.

One specific scene in Wild seems to be a metaphorical representation for all the weight Witherspoon has to bear in the film. The scene comes early, before she embarks on the hike, and shows her struggling to get her equipment on her back and proceed to stand up to hike. She is finally shown laying on the floor struggling to stand up, wiggling like a fish, with the weight of her camping equipment, hunting gear, and snack food weighing her down. Already, before she even leaves the motel room she is staying at, the task at hand seems like an insurmountable chore, as not only is her mental-load heavy, but her physical load almost entirely paralyzing.

Vallée is still on something of a hot streak, after directing two Oscar winning performances in last year’s Dallas Buyers Club, and takes on a film that is vaguely similar to his previous film in terms of how it approaches its central character. Witherspoon’s Cheryl Strayed echoes familiar reminders of Matthew McConaughey’s Ron Woodroof in the way that she starts out the film with her own centralized, somewhat stubborn attitude to go on to something of self-realization when she takes on something she never thought she could do (in Woodroof’s case, his self-realization came when he was told he was suffering from the AIDS virus and went on to help others he previously ostracized overcome the disease by selling black market drugs to those who contracted the virus).

The one negative quality in Wild doesn’t come from its central character nor its quietly similar approach to said character, but the way Vallée and screenwriter Nick Hornby handle Strayed’s story in presentation. The film is immediately burdened by constant flashbacks to Strayed’s past, which interrupt the chronological continuity and make it so we can never fully get comfortable in one particular setting. While many films use the flashback method quite frequently, and here some flashbacks are kind of required to get involved with this character, when we’re watching Strayed embark on a soul-cleansing journey, to keep ping-ponging back and forth, never allowing audiences to fully settle in and sink into her present situation doesn’t provide us with the kind of connection we need for this film. In addition, the rampant flashbacks provide little opportunities to allow audience interpretation of Strayed’s life. As stated, it’d be difficult to do the film without some kind of flashbacks, but many of the ones we get blatantly spell out certain situations when they probably would’ve been better left somewhat unknown to us.

Conducting Wild in a similar fashion to last year’s underrated and overlooked All is Lost would’ve been something to behold; that particular film concerned Robert Redford as a sailor who was trying to survive while alone in the middle of the Indian Ocean. That film had very little dialog, and succeeded on the low-key tone set forth by the screenplay and, of course, Redford’s almost-entirely physical performance. It would’ve been intriguing to see long, intimate shots of Witherspoon walking the Trail, stopping to eat, making fire and pitching a tent to survive, before doing the same thing. It would’ve been a contemplative journey not only for her, but for us, the audience.

What if Wild would’ve been more like Gus Van Sant’s Gerry, with concerned two men walking alone through the desert, occasionally confronting each other, but mostly just walking silently, aimlessly, and exhaustively through hot terrain? Wild, unfortunately, spells out a great deal of its character in such a way that there’s little left to interpret at the film’s end because much of it has either been explained or shown; “less is more” would’ve likely assisted the film in at least providing some more thought into scenarios or leaving some parts of Strayed’s earlier life with more ambiguity.

Wild, nonetheless, has the ability to encourage and motivate, something few films nowadays can do without being emotionally manipulative or downright poorly-written. This particular film is neither; it’s buoyed by a fantastic performance and concerns the deeply-human ideas of trying to forgo one’s past in order to embrace the future by attempting to temporarily free one’s mind through untold bliss. Even as the currents get rough, the mountains get steep, and Strayed becomes physically exhausted – a trait Witherspoon executes with complete conviction, truly letting her skills as an actress shine through by showing the pragmatic effect this kind of journey would have on someone – seeing her push through is something that touches the most tender, encouraging part of the human spirit, what I believe Wild is a testament to through and through.