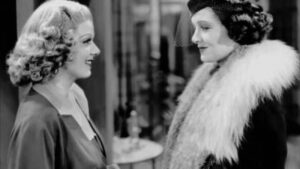 Despite having a manageable 87-minute runtime, Wife vs. Secretary is one of those films that would be over in a fourth of the time if all three of its core characters sat down and indulged in an honest conversation. When it comes to works of this nature, their fates rest in the hands of elements such as well-articulated characters, tactful drama, or some overarching thematic interest. On all counts, Wife vs. Secretary possesses very little.

This is an occasionally compelling but ultimately stagnant mid-thirties drama revolving around a love triangle lacking any and all personality. At the center of the story is magazine publisher Van “V.S.” Stanhope (Clark Gable), who is married to the lovely Linda (Myrna Loy). Like many great magazine-men of this era, V.S. is aided by a cute young secretary named Helen but nicknamed “Whitey” (Jean Harlow). Their collaboration on a secret plan to acquire another company requires them to work together for long periods of time, prompting Linda to get fiercely jealous.

Providing little help to the situation is V.S.’s mother (May Robson), who speaks ill of not just her son’s intentions but that of men in general. She makes no effort to massage Linda’s worries so much as cause her mind to work overtime in conjuring up what else the two could be doing. Then there’s Dave (a young James Stewart), Whitey’s dunderheaded boyfriend who is too hung up on the cockamamie idea of women actually contributing to the workplace moreso than any thought of infidelity.

The cast isn’t an issue. Gable plays his usual brand of smug and handsome, not doing himself a great deal of favors in squashing his wife’s rumors. In fact, it’s as if he plants more seeds of doubt in her mind, although Linda is perfectly privy of doing that on her own. Loy is quite strong in her role, which is given more empathy than initially perceived. A fine moment comes when her and her husband’s mother share a ride. Linda is writing off her mother-in-law’s accusations that her son is or is about to be unfaithful.

V.S.’s mother asks Linda if she’s jealous to which she claims she isn’t. “I try to make his life smooth and pleasant,” she responds, “the very opposite of all that back there,” in reference to her husband’s bustling gig. “The worry, action, achievement. I want to be a refuge from all that.” V.S.’s mom finds her level-headed perspective mature and noble, but still advises her to “get rid of Miss Wilson.”

There’s nothing explicitly wrong-headed about Wife vs. Secretary except for the fact that it’s often dramatically inert. It dizzies itself in a lot of dull conversations in which characters express their feelings through curated monologues; talking more than doing. Compounding matters are the messy details of V.S.’s pending acquisition, which takes up long stretches of the narrative. Clarence Brown’s direction flatly captures the characters and conversations, not adding much excitement outside of the handsome production. Material of this nature needed a certain edge. It ultimately winds up feeling too restrained, and its examination of gender politics is unsurprisingly surface-level, restrained by a screenplay that wants to go there while simultaneously hesitant to do so.

That said, Jean Harlow is definitely a standout here. This film was shot and released a year prior to her untimely death from kidney failure at the tender age of 26. She was a platinum blonde bombshell in her day, and managed to rack up a commendable catalog that made her a Hollywood favorite despite her early death. Far too many performers die before showing their range. Harlow got that opportunity at least, blessed so.