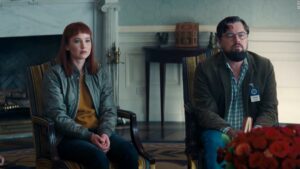 Adam McKay’s Don’t Look Up made me nervous in the beginning. It was the moment when the head of the Planetary Defense Coordination Office, played by Rob Morgan, appears. An on-screen graphic follows up another character questioning whether or not it’s a real place. “The Planetary Defense Coordination Office is a real place,” the graphic reads. “This is their logo,” the screen then reads while showing us the real-life office’s badge.

Oh, no, I thought. Here we go again with the usual blend of McKay making Family Guy seem like a linear program. Here comes the pervasive cutaways. To my amazement, that sort of tactic didn’t really happen again; nowhere near to the degree it did in The Big Short or Vice, McKay’s previous politically minded efforts. Right away, Don’t Look Up shows a certain degree of maturation for the comedic filmmaker who doesn’t seem to be doing much laughing himself these days. It’s the end of the world as we know it, after all, and everyone but McKay seems to feel fine.

In the opening minutes of the latest Netflix film sure to incite some uncomfortable holiday discourse, astronomy grad student Kate Dibiasky (Jennifer Lawrence) and her professor Dr. Randall Mindy (Leonardo DiCaprio) make an unfathomable discovery. A comet the size of Mount Everest is hurling towards Earth. At first, it’s an exciting find for Kate because it will be known as “Dibiasky’s Comet.” But Dr. Mindy crunches the numbers and realizes that it’s going to hit the planet and produce an extinction-level event. Let the countdown commence: six months, 14 days till impact.

President Orlean (Meryl Streep) and her chief-of-staff/son Jason (Jonah Hill) have bigger things on their mind, including a provocative scandal involving a SCOTUS nominee and upcoming midterm elections. Kate and Mindy are aghast by their apathetic attitudes. They pivot their attention to one of those light and puffy morning news shows, hosted by two vacuous hosts (Cate Blanchett and Tyler Perry), who would rather talk about the love life of pop singer Riley B. (Ariana Grande).

Kate and Mindy’s TV appearance doesn’t prompt anything other than copious memes of Kate being portrayed as a lunatic. It takes an embarrassing scandal for Orlean to finally act on the comet’s impending arrival only for her mission to be derailed by a tech billionaire named Peter Isherwell (Mark Rylance). Isherwell wants to mine the comet for precious metals because a capitalist society knows no lows. This sort of cynicism makes Kate throw her arms up in defeat. Meanwhile, Mindy becomes a ubiquitous presence on cable news, warning of what’s to come.

Seeing something like Don’t Look Up reminds you how difficult it is to make satire in such a polarized political climate fueled by extremists on both sides who needn’t do more than walk off the nearest cliff. Before Trump was president, somebody like Streep’s President Orlean would’ve been easier to digest, as someone of her caliber wasn’t a clear and present threat. Somebody like Rylance’s Isherwell wouldn’t make many squirm if folks like Elon Musk didn’t have groupies as ferocious as Taylor Swift. Even Lawrence’s Kate feels like one of those insufferable Twitter urchins whose Twitter account is filled with self-pity, caustic attacks on whatever is allegedly to blame for her sour mood today, and memes.

While McKay’s latest is obviously one big metaphor for climate change, viewing it during a catastrophic global health crisis only ups its urgency and reminds you that we as humans can’t even do the bare minimum in regards to what is good for us. As a result, Don’t Look Up doesn’t play like your average comedy. It’s often entertaining, but never very funny. How can it be? These are dark times, and you get the feeling DiCaprio is playing McKay’s stand-in here, especially during Dr. Mindy’s vulgar outburst on a talk-show — one of the film’s most powerful scenes if only because it resonates with climate change, the pandemic, and quite frankly, a handful of other things too.

Speaking of DiCaprio, kudos to McKay for mining one of the most manic and unhinged performances out of the normally stoic A-lister in a blue moon — maybe ever. It’s not very often we see DiCaprio play frightened and vulnerable. Even in Martin Scorsese’s painfully underrated The Aviator, where he played pilot-turned-director-turned-hermit Howard Hughes, DiCaprio wasn’t this nebbish. His personality contrasts with Lawrence’s effectively, as she does wonders in humanizing her role when she meets and starts to fall for Timothée Chalamet’s punk skateboarder. From the top down, the performances fill in the gaps where the film begins to feel long. Ron Perlman earns a couple laughs as an unapologetic patriot willing to die for his country. Perry and Blanchett are dynamic as trashy talk-show hosts. Jonah Hill gives it his best as an itchy-nosed Donald Trump, Jr-clone, and Melanie Lynskey clicks if only for the sheer fact that she seems like the only normal human being in the entire film.

As is the case with most McKay projects, the urgency is dialed up to 11 at all times. Don’t Look Up waffles back and forth between comedy and drama sometimes haphazardly. In these moments, it’s really heightened by its performers, most of whom can play ball with such frenetic material. At this juncture, McKay’s style very much is what it is, and few detractors will be converted to fans with this one. Here, he’s largely ditched his cluttered, self-referential infographics in favor of what ultimately feels like a cohesive project.

If we’re all doomed in the end, we might as well celebrate the little wins.

NOTE: Don’t Look Up is now streaming on Netflix.