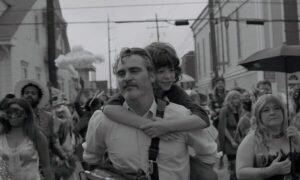 Mike Mills has directed only four movies over the last 16 years, beginning with Thumbsucker in 2005. His last two features, Beginners and 20th Century Women, were biographical works about his father and mother, respectively. With C’mon C’mon — his first in five years — Mills moves on to the uncle, who is much harder to profile. Ostensibly everybody has one “cool” uncle in their lives. Oftentimes they’re rendered cooler (and wealthier) if they’re unmarried and childless, for they’ve swerved away from the mold in which American society tries to hamfist them.

I have no siblings, so I’ll depressingly never serve as a true biological uncle. I sort of serve as an uncle figure to one of my friend’s kids, and I contend it’s the best possible role. When she cries, I give her back to her parents. Nice work, if you can get it.

Now, allow me to pivot. Imagine being a child on this broken planet, living through a never-ending health crisis, worsening environmental turmoil, and rampant inequality — all looming issues. Those who should be working to mitigate such disasters would rather dump gasoline on the fires of division, squabbling until we’re all in the grave and past the point of no return. It’s a tough load to bear for young, impressionable minds, and Mills makes a strong effort to examine the consciousness of children.

He does so through Johnny (Joaquin Phoenix), a radio journalist who travels the country with a long microphone and luggage filled with gear. He sits down with countless kids and gauges their thoughts on their communities and respective futures. Some of the kids he talks to are optimistic. Some are fighting off hopelessness. Reportedly, these conversations are authentic and unscripted. If so, it explains why these interspliced moments play like a documentary working germanely alongside the fictional narrative.

It also helps elevate C’mon C’mon when it starts to get too scripted for its own good.

Like most adults, Johnny is simply trying to find success, even if that success is sometimes making it through another day. Ironically, he hardly ponders his own future. He’s far more interested in the lives of his subjects, and one gets the feeling his future will be talking to them, gathering their ideas until he can no longer work. The PostScript for this character would surely produce a considerably darker movie.

Johnny is summoned from New York to Los Angeles by his sister Viv (Gaby Hoffmann), who needs to travel to Oakland to care for her estranged husband (Scoot McNairy), who is struggling with mental illness. She needs someone to care for her nine-year-old son Jesse (Woody Norman), who is inquisitive to a fault. He pokes and prods Johnny with questions he can’t possibly answer. As mundane as Johnny’s job is, caring for Jesse must take precedence over his work, frustrating him especially once he takes the kid back to New York with him.

This act of babysitting is largely inspired by Johnny’s regret in handling the passing of his mother. While it’s never concretized, their relationship took a frosty turn with the death of their mother. And although he may get on his nerves, Johnny gains a new appreciation for the world with the help of a kid who is becoming increasingly perceptive of the fact that the adults in his life have no idea how to handle what’s going on themselves.

Your mileage with C’mon C’mon will depend on your response to an impossibly precocious nine-year-old, who says things like “agile deceased dead person.” Sometimes, Jesse pretends to be an orphan. In this scenes, he asks his mother (or Johnny) to play the role of a foster parent while he asks questions about his “dead” relatives. It’s simply too far-reaching to believe a nine-year-old is this eccentric. Frustrating all-the-more is when scenes are so close to being great only to derail due to more of Jesse’s incredulous babble. Consider the aftermath of when Johnny collapses while carrying Jesse on his back. When they return home, Johnny tries to get Jesse to admit that he was scared, an entirely reasonable response. Jesse understandably wants to play tough and deny his fear. Then he goes into monologue mode, reciting dialog so poetic you couldn’t believe someone four-times Jesse’s age would recite it off-the-cuff.

The fault isn’t in Norman as a young actor so much as it is Mills’ script, which loves the idea of a precocious toddler, but doesn’t know when verbosity from said toddler becomes downright inexplicable. The frequent dark undertones in things he says only further many of the uncle-and-nephew exchanges down a path of sounding ludicrous.

Phoenix remains commendably understated, even when Jesse not once but twice disappears in the blink of an eye, leading Johnny to panic in fear he’s been abducted. In stark contrast to his previous film, Joker, Phoenix is shockingly simple yet effective in how grounded stays.

Mills’ decision to the shoot the film in muted black-and-white winds up being more of a plus than a stunt, however. Cinematographer Robbie Ryan (Marriage Story) finds it difficult not to romanticize Manhattan’s towering exterior through the absence of color, even when the material within is bleak. As a writer, Mills’ characters don’t try to remedy calamity with empty platitudes. They seek compassion and togetherness, which is evermore thoughtful. While Hoffmann’s role in the film is quickly relegated to text messages and telephone exchanges, Viv’s conversations with Johnny are eventually marked by empathy, rescuing the film from being an empty tone-poem.

When it comes to the interviews with the kids, a young Black girl from New Orleans stands out. She remarks how the gentrification efforts and increase in tourism have worked to make the beacon of culture just another interchangeable American city. She believes the people who were born and raised on the traditional NOLA culture will continue to make the city what it is, therefore taking the more optimistic route.

C’mon C’mon is littered with touching moments. If you can get past the fact its premise is built on a rosy trope that works to undermine its more powerful bits of tenderness.

NOTE: C’mon C’mon is now available to rent on a variety of streaming platforms.