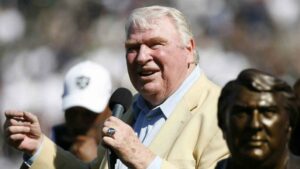 When news broke on December 28th, 2021 that John Madden had passed away, my mind immediately went to the highly publicized documentary, All Madden, which aired on FOX just three days prior on Christmas Day. How serendipitous that in his twilight days, the football legend got to see so many current and former players, broadcasters, and confidants speak so glowingly about him as a person and a professional. Madden had done that himself for decades. Now, it was his turn to see his legacy up close. We should all exit this world on a note so beautiful.

All Madden is little more than a love-letter to the titan who successfully managed three separate hall of fame careers in a lifetime. Yet like most documentaries of its breed, it’s good for a few smiles and necessary reminders of its subject’s greatness.

Madden was the head coach of the Oakland Raiders from 1969 to 1978. In 1977, he became the youngest head coach to win a Super Bow at 40-years-old. His sterling .750 winning percentage ranks second all-time in the NFL. His abrupt retirement two years later was a stunner, but it was a result of the immensely difficult life of a professional coach. Madden would never coach again. He’d instead find his way into the broadcast booth, a spot where he’d reside for 30 years. To date, he’s the only broadcaster to work for all four major networks (CBS, FOX, ABC, and NBC).

In a career defined by stunning accomplishments, Madden’s most contemporarily underrated might be jumping ship with the NFL when the league moved its NFC coverage from CBS to the fertile upstart network FOX. Nobody knew how the league would fare on a network that didn’t seem equipped to handle NFL broadcasts. Had Madden not come aboard, there’s a good chance the league wouldn’t have lasted on the network.

Madden’s exuberance in the booth was only compounded by his ability to teach. When his playing career never took hold, he wound up using the education degree he obtained at Cal Poly in a unique way. He’d abuse the telestrator on football broadcasts to assure a man or woman of any age would at least garner a basic understanding of the infinite nuances that reside in every play. In no time, his initial aversion to broadcasting was gone. It turned out to be another calling in his colorful life.

Finally, you can’t talk about Madden without mentioning the eminently popular video game, which has generated more than $7 billion in revenue since its inception. We’ve entered an era in the NFL where the majority of players (and even young coaches) played the game in their younger years. More than just a detail-specific simulation of an actual contest, the Madden series breaks down coverages, complex play design, and teaches clock management. Most of us football fans have at least one memorable moment from the game at some point in our lives.

All Madden is only 74 minutes long, so its depth of coverage is lacking. You get morsels of information where there’s bound to be more, namely when John’s wife Virginia and his sons comment on how the constant absence of his presence during his coaching years was a difficult adjustment. I personally could’ve used more scenic clips from Madden’s trademark “Madden Cruiser,” a giant tour-bus he acquired for travel to-and-from broadcasts due to his disdain for flying. This is a documentary predicated on coverage and comprehension as opposed to detail.

Instantly recognizable faces such as Lawrence Taylor, Brett Favre, Troy Aikman, Al Michaels, and Tom Brady do their part in emphasizing the humanity of the legend. Sports writer Peter King sums up Madden’s indelible footprint on the game and the league as a whole by saying, “he stopped to smell the roses.” Despite how his obsession with football penetrated deep into the core of his being, he nevertheless was able to connect with countless people both in-person and from afar. He’d be just another amazing coach and broadcaster if it weren’t for his incalculable humanity.

NOTE: All Madden is now streaming on ESPN+ with a subscription, and for free on Tubi.