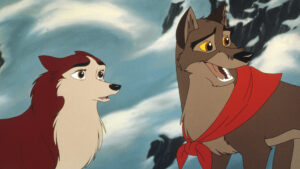 Sometimes you just want to start a new year with some escapism from this cold, cruel world. Sometimes, the film you choose for such escapism happens to be about a deadly epidemic washing over a remote town in Alaska, prompting widespread quarantines, and the only sliver of hope comes in the form of a half-wolf dog who tries to navigate treacherous tundra in order to provide the necessary medicine. You can’t win in this pandemic-stricken decade.

Such is the premise of Balto, which was the third and final theatrical release from Steven Spielberg’s spinoff production company Amblimation before they folded in 1997. In a landscape that saw Disney making modern classics and Pixar forming on the horizon, they couldn’t compete with their soft-colored animal-centric stories. It’s more surprising that their three features — this, An American Tail: Fievel Goes West and We’re Back! A Dinosaur’s Story — were so generic when Spielberg was the brainchild behind the studio.

While Disney was peddling Lion King toys in Happy Meals, Amblimation was lucky to get their Balto toys in Hardee’s kids meals.

Set in Nome, Alaska, Balto (voiced by Kevin Bacon) is an outcast. He’s not pup enough for the other dogs and he’s not wolf enough to lead a pack. Despite being part wolf, dogs like Steele (Jim Cummings) have no problem picking on him with a sometimes shocking degree of cruelty. Balto at least has a goofy goose named Boris (Bob Hoskins), two dopier polar bears (voiced by that Phil Collins), and an attractive Husky (Bridget Fonda) on his side. Still, he yearns for a shot at being a sled dog, like most of the canines in Nome. He gets an opportunity to prove his worth, however, when a diphtheria epidemic whacks the snowy community, and the perpetually inclement weather makes air travel impossible. Balto sees his shot to retrieve the held-up-medicine after Steele and other dogs end up getting lost on the trail.

Balto is based on a true story, which the movie acknowledges with bookended live-action scenes involving a grandmother and her grandchild roaming through a New York City park in search of his monument. It’s an under-told story that doesn’t get a whole lot of life brought to it here. Stylistically, the film resembles that of a TV special with its pleasant storybook aesthetic. The animation on the dogs and children characters is just fine, but there’s an inexplicable stiffness to the adults. You really notice it in the beginning, when legions of townspeople gather on the sidewalk to watch the sled dog race. The adults walk extremely slow; it’s glitchy and unnatural. Thankfully, this problem all-but-disappears during the second act when the focus is almost exclusively on Balto’s mission.

What doesn’t disappear, however, is just a general sense of blandness, which stems from archetypal characterization. Balto is so aggressively an everyman(‘s best friend) that he doesn’t conjure up much personality. None of the other characters transcend their types either, which renders Balto blasé despite its stranger than fiction story. Because there’s no one to embrace for their unique qualities, you’re left with just another animated dog movie, history be damned.