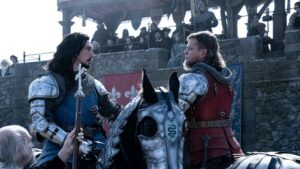 An almost constantly ugly, perpetually gray movie can still be rendered visually arresting, especially when directed with a well-trained eye like Ridley Scott’s. With its Rashomon-esque structure, The Last Duel toys with perspective by providing three different accounts of the same event. Where small details sometimes remain the same, crucial differences change our opinions on people. It’s not necessarily a surprising revelation once you ponder how the losers in history have a very different tone and perspective than the so-called winners.

The Last Duel cultivates intrigue immediately due to its offbeat collection of talent. Based on true events, the screenplay was written by Ben Affleck and Matt Damon — their first collaborative script since Good Will Hunting — and Nicole Holofcener, who has made a name for herself with films like Can You Ever Forgive Me? Damon and Affleck act, as well, alongside Adam Driver and Jodie Comer of Killing Eve fame. Furthermore, there’s a satirical edge coupled with a feminist perspective not ordinarily afforded to works set in the 14th century. Now throw in Ridley Scott, as stalwart a director as they come in America, with an affinity for this kind of material that needs no introduction.

We’re dropped into France around the time the Hundred Years’ War is decimating France, on top of a plague and political uncertainty. A knight by the name of Jean de Carrouges (Damon) has spent most of the year fighting in the Caroline War. He returns home to his wife Marguerite (Comer) claiming to have been raped by his confidant and fellow knight, Jacques Le Gris (Driver). Lurking in the background as a philandering ruler, Affleck is Count Pierre d’Alençon, who reveres Jean. Or is it Jacques? Depends on who you ask.

The Last Duel is broken up into three chapters: the first deals with Jean’s perspective of the events, the second belongs to Jacques, and the third is Marguerite’s. Adhering to Rashomon — a heavy point-of-comparison for critics and audiences — the chapter titles are billed as “The Truth According to Jean de Carrouges,” for example. Note how the text “The Truth” remains on-screen for a few seconds after “According to Marguerite de Carrouges” has faded.

We know within the opening minutes (if not for the title) that this matter will result in a duel between Jean and Jacques with God letting the truthteller live.

As expected, the differing accounts play with our perceptions in an enjoyably unreliable manner. Per Jean’s account, his wife was raped by his friend out of jealous for his acts of valor. Jacques, on the other hand, believes himself to be innocent despite what occurred between him and Marguerite being cut-and-dry in any century. Then Marguerite’s perspective sheds a different kind of light on archaic societal misgivings, off-handedly acknowledging the rarity of this particular tone in period pieces both contemporary and classic.

Cinematographer Dariusz Wolski (Pirates of the Caribbean) brings an astute level of care to the visuals. Snow falls across the empty plains; the cold exteriors are starkly contrasted from the cozy, fire-warmed interiors; the wily horses and towering castles make these ostensibly indestructible men out to be diminutive in size. Scott’s prowess at directing large-scale action is only seldom-seen, yet his talents for character-centric sequences remains one of his most underrated qualities. He can make a dinner table conversation crackle with intensity simply by the manner in which he chooses to shoot it — a gift helmed by all the great directors.

It shouldn’t be a surprise to say that Driver assimilates into this world a bit better than his colleagues. He has an unmistakable lurch, both in posture and cadence, that at some points, it’s almost as if wearing ironclad, 14th century armor suits him better than modern street-clothes. Damon and Affleck are good, mind you, but their own celebrity ubiquity undercuts their ability to blend (Affleck’s blonde hair might provide a snicker at first as well). Still, they’ve approached this material with a conscience heart (undoubtedly aided by Holofcenter).

However, it’s Jodie Comer who steals many of the scenes during her account, which only makes sense. In Jean and Jacques’ retelling, she’s merely a secondary character. “A matter of property,” as one clergyman puts it late in the film. Marguerite is given humanization in the third chapter and Comer reinforces it with carefully handled emotion and conviction.

Contrarily, The Last Duel‘s most disappointing element is its pervasive lack of subtlety. It’s retrofitting a story from the Medieval Times to fit our contemporary, gender-conscious present, and it underscores that aspect nearly every chance it gets. Removed from the screenplay is a layer of ambiguity that would’ve helped Scott’s epic linger in the mind longer than it probably will. You might tend to disregard this as you find yourself leaning forward to take in the titular fight, which is exhilaratingly shot; well-worthy of the two-hour buildup.

As a year, 2021 surprised us in many ways, mostly negative ones. What I couldn’t have imagined was that Ridley Scott’s under-promoted box office dud was a showcase of nearly everything he does so well while his heavily marketed drama about a dynastic family of fashion designers would be the weaker of the two efforts. Put these two movies in a ring and The Last Duel is Mike Tyson while House of Gucci is Logan Paul by comparison.

NOTE: The Last Duel is now available to stream on HBO Max.