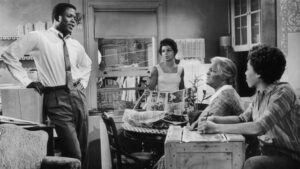 I’ve become more ambivalent to a particular criticism with film adaptations of stage-plays. I’m absolutely tired of hearing that films of this realm are “too stagey,” or worse, “too much like a play.” Never mind the fact that the setting in plays is often a character unto itself, it’s a cheap critique I feel stems from something larger: a lack of engagement with the dialog, the characters, or the situation at hand. It’s becoming on par with “the book was better than the movie” in terms of critical pet-peeves. Even the everyday populous engaged enough to leave casual reviews of films on such sites as Amazon and IMDB should feel compelled to do better.

That criticism certainly hasn’t eluded the beautiful, 1961 adaptation of Lorraine Hansberry’s play A Raisin in the Sun. Largely set in a Chicago apartment, the story revolves around the African-American Younger family: grandmother Lena (Claudia McNeil), husband and wife Walter Lee and Ruth (Sidney Poitier and Ruby Dee, respectively), their eldest daughter Beneatha (Diana Sands), and their young son Travis (Stephen Perry). The family has outgrown Lena’s tight quarters and is anxiously awaiting a life insurance check of $10,000. Unsurprisingly, each member of the family has an idea of how to spend it.

Lena wants to buy a home, finally fulfilling the dream she had with her now deceased husband, who saw the apartment as a stopgap option that sadly proved long-term. Ruth agrees with the sentiment, but it’s Walter Lee who has grander ambitions. He wants to use the money to invest in a liquor store, providing more stable income for the family that would hopefully elevate their children into a better life. Walter Lee’s ambitions might be more believable to Ruth and the family if he didn’t spend his evenings getting drunk and discussing “what if” scenarios with his pals down at the gin-mill. More pressure is added when Beneatha finds out she is pregnant in the midst of planning for medical school — what she hopes her cut of the money goes towards.

These juicy conflicts loan themselves to a riveting, if exhausting two hours. The primary conflict at hand is greatly similar to that of August Wilson’s play The Piano Lesson. Wilson’s work details a family at odds about what to do with their family’s ancient piano, which was inherited during slavery. Boy Willie is hellbent on selling the piano in order to purchase a fine piece of land while his sister, Berniece, who cares for the piano, is adamantly opposed to the very idea. Both Ruth and Berniece harbor the same insistence in stopping their family from impulsively spending money that could be used for practical measures. Both Walter Lee and Boy Willie have a more entrepreneurial idea in mind: property is the end-goal for them. Property that could be earning them money and furnishing generational wealth in pursuit of upward mobility.

In the case of A Raisin in the Sun, generational politics greatly come into play. Consider Lena’s emotional tirade when she realizes Beneatha has grown to reject Christian principles. At one point, she curses God and takes offense at the thought of his very existence given their prolonged financial woes. In a rational mindset, one can hardly blame Beneatha’s beliefs. Yet Lena has done a lot for the family, guided by faith and a strict moral code. The situation in which the Younger family finds themselves isn’t desirable, but it’s workable. But how long before workable simply doesn’t work any longer?

The parallels in both Wilson and Hansberry’s work are strong. It’s no wonder director Daniel Petrie and company elected to use Hansberry’s play verbatim as the screenplay for the film adaptation. Plays have an age-old tendency in dealing with long character monologues, and those words are strengthened by the crop of talent on display. You probably already know how Poitier is one of the best actors ever to set foot in front of a camera, so I need not go into detail about how spellbinding he is in various moments. The emotional anchor for this story rests in the gentle yet firm hands of Claudia McNeil, who gives a tour-de-force performance as the tough-love grandmother. She commands even the most crowded scenes.

A Raisin in the Sun deals with the eternal conflict for many Black families faced with the untidy decision of staying true to legacy and family versus the risky pursuit of upward mobility. Two made-for-TV versions of this story followed; one in 1989 (starring Danny Glover as Walter Lee) and 2008 (with Sean “P. Diddy” Combs in the role). At this time, I can only speak for Petrie’s adaptation, which sits comfortably alongside Guess Who’s Coming to Dinner and A Patch of Blue, two other Sidney Poitier works that should be on your list if you haven’t seen them. And don’t you dare come at me with the usual criticism of stage-plays when you finally see this one.

NOTE: A Raisin in the Sun is available to rent on various streaming platforms.