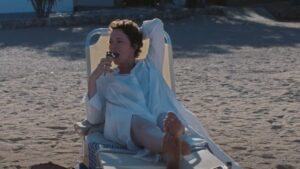 With The Lost Daughter, Maggie Gyllenhaal directs a lofty, complicated story with such confidence that it’s a stunner it’s her first time behind the camera. Where some directors might’ve struggled conveying an intensely subjective POV, interspersed with glimpses of the past, Gyllenhaal is steadfast in making beautiful music within the chaos. She doesn’t strive to understand her lead’s motivations but revel in her vulnerabilities.

Armed with two brilliant performances of the same character at different stages in her life, this is compelling, if troubling stuff.

That character is Leda Caruso, played by Olivia Colman, a 48-year-old college professor on holiday in Greece. She settles in by reading on the beach, while a caretaker named Lyle (Ed Harris) aids in her stay. It becomes clear in only a handful of scenes that Leda has a difficult time with social interactions. She strives to be polite, but she always has the look of someone who can’t wait to leave the conversation. Amidst a crowded beach of families, her eyes wander to a large family, particularly a young woman named Nina (Dakota Johnson) playing with her young daughter. Leda’s eyes intensely linger on the two; the dynamic reminds her of her own. Over the course of the film, it will demystify itself.

Leda’s first interaction with Nina and her pregnant sister Callie (Dagmara Dominczyk) couldn’t be more painful, exclusively to Leda’s own doing. Callie asks if she wouldn’t mind moving to another beach chair so the family can sit together. Leda refuses. It’s such a simple request, why wouldn’t she oblige? It’s not the last time Leda will interact with the young, exhausted mother nor her mouthy cohort.

The intensity of these present-day glimpses into Leda’s life are interrupted by Leda’s life 20 years prior. Less a series of flashbacks, these scenes are interjected in such a way that presents them as if they’re running on a parallel timeline with Nina’s experiences — while Leda bears the consequences. The younger Leda is played by Jessie Buckley, a natural actress and absolutely credible as Colman’s younger self. As a twentysomething mother trying to raise two clingy girls and balance her career ambitions, Leda is overwhelmed and easily irritated. Enter a celebrity scholar (Peter Sarsgaard) who makes both Leda and her work feel sexy. A rendezvous with him is the closest thing to a vacation she’s had in years. Does it merely have to be a vacation?

Based on the novel by Elena Ferrante, Gyllenhaal — working as both writer and director — marries herself to Leda’s unreliable nature. The perspective is so indivisible to Leda’s point-of-view that we almost have no other choice but to view her experiences with a bias. Certain scenes will end with tension or awkwardness you could cut with a knife. Or better yet, the continuity will suggest a certain interaction didn’t occur. In one example, Nina puts her hands on Leda’s cheeks and kisses her on the lips. A shot-reverse-shot look at Leda shows her smiling as a result, but doesn’t show Nina’s hands lift from her face. Even Nina’s subsequent position doesn’t reflect the appropriate distance between the two women.

In contrast, one sequence that’s entirely believable in its honesty is when Leda is watching a movie at the local cinema when a group of obnoxious men arrive. They throw popcorn at the screen and make dirty comments, disrupting everyone’s experience. Leda complains to an usher, but to little avail. She snaps at the boys and is then rendered embarrassed. It’s not that Leda is made out to be a hero in many moments of the film, but seeing her so compromised and upset leads one to believe it’s an honest recollection of events.

In an intense role that almost never has her out of frame for a full minute, Olivia Colman shines. And shines brightly. Over the last several years, Colman has informed the masses of her talents in playing layered roles with mere Cliff Notes as the blueprint. She’s tremendous in showing us a character who might not be expressly relatable, if you’re going to parse fine details (peeling an orange like a snake, “so it don’t break”), but one who shows the uglier details of those who can lack empathy when needed the most. Her counterpart in Buckley makes a character out of her comparatively limited screentime. Our moments with the younger Leda are so involved in their immediate pressure and anxiety that they beg for a breather when the timeline reverts back to the present.

I can’t stress how impressive these finer details are for an actress-turned-director in her first go-round with a feature-film. Bravo, Maggie Gyllenhaal.

The Lost Daughter is about a lot of things, but the selfishness allotted in motherhood is paramount. Mothers across the world spend so much time caring for their children that they routinely neglect their own wellbeing. My mother once told me there wasn’t a time when I was young and ill that she didn’t wish that she was the one who was sick in order to take my pain away. That kind of empathy is liable to catch up to you in the most brutal of ways.

NOTE: The Lost Daughter is now streaming on Netflix.