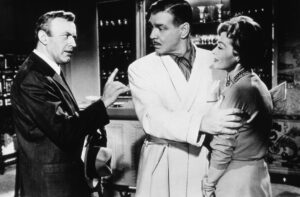 I’m quickly realizing that I prefer older, humbler, put-in-his-place-often Clark Gable as opposed to impossibly-and-unrealistically-suave Clark Gable, who — let’s be honest — was sometimes solely flying by the strength of his attractiveness in his salad days. But Not for Me was his third-to-last feature film role, and one of a three-picture deal at Paramount. These films, including the superb Teacher’s Pet and the fluffy yet affable It Started in Naples, have seemingly earned themselves the reputation of being flyweight-fare for the handsome Hollywood vet.

Consider Terry Teachout’s terrific essay on Gable, whom he bills as “the once and former King” (sidenote: the final piece Teachout published before his death this month). He devotes half-a-paragraph to these later ventures, calling Teacher’s Pet “vapid” and saying his later works were “largely unworthy of his talents.” The time has come for a second look at these pictures, including Walter Lang’s But Not for Me. I hope I can extract some wisdom, or better, motivation for others to start.

But Not for Me is a splendid, crafty comedy that has, like many of these late Gable efforts, the King coming to grips with his age. It becomes a running joke for his character, Russ Ward, a Broadway producer whose secretary is in charge of remembering the year he was born. He’s 50-something and, early into the film, on the verge of quitting the industry after 34 productions. “It took me 30 years to produce 85 hours of entertainment,” he tells Ellie Brown (Carroll Baker), another one of his nubile secretaries. “About three days worth of fun.” Later on, he attempts to blow 50+ candles out of his birthday cake, which leads to a silly gag. The correct number of candles aside, he’s not the breath of fresh air he once was.

It’s when Russ opines about selling everything and turning the keys over to the bank that Ellie confesses her love for him. She’s simultaneously smitten yet infuriated that after so much time spent together, he hasn’t so much as noticed. Like any good creative, he finds inspiration in the moment. He implores his drunkard playwright friend (Lee J. Cobb) to pen a screenplay with Ellie’s declaration serving as the climax. It’s his comeback moment. Ellie is initially dismayed — “Here I fling myself shamelessly at you and all I arouse in you is the producer,” Baker says with exceptional delivery — but she can’t pass up a gold-plated acting break.

Also in the mix is Kathryn (Lilli Palmer), Russ’ feisty ex-wife, who believes she can see through his real intentions as if they were distilled into a vodka bottle. She thinks it’s a ploy to bed-and-wed the innocent Ellie despite the fact that Ellie practically minimized all the hard work for her superior if he truly wanted to. Barry Coe’s Gordon takes the “Russ” role in the play, and finds himself increasingly attracted to Ellie. It’s not unrequited love so much as pyrrhic love. Somebody’s gonna hurt someone before the night is through.

Working off of Samson Raphaelson’s 1934 play Accent of Youth, screenwriter John Michael Hayes achieves comic and dramatic heights by giving every scene a purpose, and sometimes an added sense of symmetry. During the third act, Ellie and Kathryn meet privately for a discussion that will likely stay with the young upstart actress for many years. Kathryn has grown to see that Ellie’s love for Russ is real, but she cautions her about those monthlong international excursions he takes. There is certain to be another flirt that will catch his eye with due time. The scene allows Palmer’s character breathing room, and for her to show off that impossible eloquence in mannerisms you only wish extended itself into real-life on a more consistent basis.

That exchange is followed by another private one between Russ and Gordon where Gordon lashes out at his producer. Gordon is in a footrace against an Olympic sprinter while he started with untied shoes three sizes too big. He can’t offer Ellie the glamour, the status, nor the fruitful opportunity Russ can. Hell, his ultimate goal is to leave theater and head west for a more regimented lifestyle. In true Russ (Gable) fashion, he stakes a wager, in a sense fitting him for shoes that are more his-size and letting him get a head-start.

The contrast is so classically male and female, proving that even some of the most unassuming Old Hollywood films in their day had shreds of feministic touches.

It’s worth noting that for Gable shows himself, at one point, to be as disheveled as he’s ever appeared on-screen. I dare not ruin the circumstances for which inspires it. It highlights the criminal unfairness of life, however. A clammy, booze-swilling Gable, equipped with five o’clock shadow, is still a few degrees handsomer than he has any right to be. Compare him to Cobb’s alcoholic screenwriter. One is far more realistic.

But Not for Me is another late-era Gable delight, elevated by a charming ensemble with a script that prioritizes dynamic storytelling and character development. It’s by no means material that deserves to be overlooked.