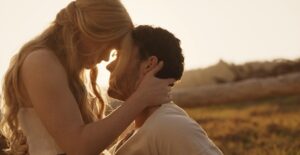 If you or a loved one live in one of those parts of the US where the wind chills are presently subzero — or even where COVID-19 cases are surging — and you ventured out to see the dismal Redeeming Love, you should be entitled to compensation. Or at least a free ticket voucher for your next, hopefully more enjoyable outing.

The second film from Pinnacle Peak Pictures (formerly Pure Flix) is far and away the studio’s most risqué offering to date. To my knowledge, it’s the only film in their repertoire to feature multiple sex scenes, let alone acknowledge prostitution in an unambiguous manner. But the company’s most transgressive offering is one of their least entertaining as it combines overwrought schmaltz with a romance predicated on an icky power imbalance — with two leads absent of personality.

Adapted from the popular novel by Francine Rivers (who co-wrote the screenplay), Redeeming Love is set against the backdrop of the California Gold Rush of 1850. It’s quite possibly the cleanest illustration of the era. The dirtiest characters still appear caked in makeup, and the angelic sunshine would make this locale more believable if it was billed as Heaven on Earth. A young woman named Angel (Abigail Cowen) is the highest-priced whore at the local brothel (which is named “Gold Rush,” as if things couldn’t get hokey enough). Angel was sold into prostitution as a child, by a perpetually abused mother who turned to the oldest profession through no other means of raising her daughter. Upon her death, Angel takes her cross necklace and flings it into the ocean.

Enter Michael (Tom Lewis), who looks less like a dirt farmer than myself. He ostensibly walks off the set of the next upcoming Nicolas Sparks adaptation and prays at the alter for an adoring wife. God answers by giving him a glimpse of Angel; it’s love at first sight because of course it is. Michael then spends several days at the brothel not to score, but to talk to her, which is a fruitless task as she couldn’t be less enthused. The good Christian boy is ceaseless in his efforts, however. He visits her daily, and finally gets her to marry him. But like a stray, she persistently runs back to the only life she knows. No big deal. Michael will wait. And wait. And continue to wait for his wife, who will inevitably find her way back to him to show her a life to which she doesn’t feel entitled.

Logan Marshall-Green affords this movie a level of competence it consistently seeks to elude by giving the most layered performance as Michael’s brother, Paul. A conflicted man burdened by his own self-loathing, he can’t help but wonder why his brother would bother with a two-bit tramp. There’s also a pedophilic Duke played by Eric Dane, whose unspeakable atrocities are — like the entire production — presented in a squeaky-clean light that effectively undermines their heinousness.

The beatification of Redeeming Love remains its ugliest quality. It sanitizes the Old West, turning its characters into archetypes that exist in the safe confines of romance paperback novels and literally nowhere else in reality. I have no idea whether Cowen and Lewis are good actors because the film around them resembles a Bible school play. I can say that they have little chemistry on-screen. Michael is so damned perfect that he lacks any humanistic qualities while Angel’s hard knock life is given the Hallmark treatment, with every flashback lacking the slightest inkling of tooth. The urgency is almost unbearably low because we know that no matter how much she flees — for reasons that are either unclear or for the sole purpose of adding conflict to the plot — she’ll end up in the waiting arms of a man with a patience-level which might exceed that of God himself.

Co-writer/director D. J. Caruso and Rivers seem to suggest that the poor courtesan is a sinner in need of saving, which is wrongheaded in itself. She didn’t choose the life with which she wound up. She’s a victim of the saddest circumstance possible for a woman in her situation. Most Pinnacle Peak films are undone by the degree in which they incessantly proselytize rather than humanize (I’m Not Ashamed, Do You Believe?) or, worse, use faith as a cloak for right-wing propaganda (God’s Not Dead: We the People, Unplanned).

Redeeming Love is the first time the studio dares recognize the disgusting reality of human trafficking and it can’t even flash a specific outreach program nor phone number before the credits roll.