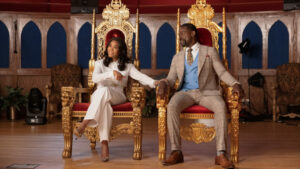 Honk for Jesus. Save Your Soul. satirizes megachurch culture to enjoyable effect. Loosely based off the Eddie Long scandal that rocked the pews of New Birth Missionary Baptist Church in Georgia just a few years back, Adamma Ebo (expanding her 2018 short film) puts a stamp on her debut feature in the form of a pseudo-documentary style that mostly works despite some tonal inconsistency.

Lee-Curtis Childs (Sterling K. Brown) was once a stalwart pastor. With his faithful wife and best friend, Trinitie (Regina Hall), by his side, the two were unstoppable forces that preached to 25,000+ at their snazzy megachurch, Wander to Greater Pastures. Those days have been rendered long gone; Lee-Curtis has endured months of public scrutiny following a sexual abuse scandal that’s all but sunk them both. With a reopening date set for Easter Sunday and a documentary chronicling their comeback being filmed, they are ready to get back to preaching. They want to gnaw through any barriers with “the tenacity of a rat,” according to Trinitie, indeed implying what they actually are.

Well, at least what one of them is. Lee-Curtis is your typical attention-craving “man of God,” while Trinitie is clearly faking a smile that tries but fails to conceal that she’s at her wit’s end. Ebo is pointed in the way she reveals the pain Trinitie is holding back. She’s just one heckle or confrontational moment away from losing it as she often buries her own true feelings in favor of her husband’s big ideas.

Ebo shifts between dueling narrative styles effectively enough to double-take at the fact that she’s a first-time filmmaker. Much of the movie is shot through the lens of the documentary. When the Childs demand a candid moment, the film’s presentation shifts to a more-pronounced widescreen (with black bars at the top and bottom). Fake news reports, man-on-the-street-type interviews, and archival footage are all aesthetically loyal to their real-life counterparts, down to scuzzy VHS prints of Lee-Childs’ early sermons that recall old 700 Club tapes.

Sterling K. Brown was probably a pastor in another life. That might be the only way to explain how terrific he is in every facet of Honk for Jesus. He’s a frighteningly realistic proselytizer, and harbors the same chops when his character is off-camera. Yet it’s Regina Hall who affords the movie an emotional anchor as Ebo’s tone darkens with time. Hall can let out a convincing “Amen!” (although she prefers the traditional “ah-man” to her husband’s “aye-men”). Both her and Brown have chemistry whether they’re fighting or rapping along to “Knuck if You Buck.”

Their subtleties in what is mostly a fairly straight-forward satire surface in moments when they show how they’re so used to controlling their image. The ensuing scandal has only worsened their domineering sides. “You can cut,” a distressed Trinitie will tell the director at several points, while Lee-Curtis more-than-once suggests they can “edit around” a certain miscue or public ass-chewing. Brown harbors an egomaniacal twinkle in his eye when he returns to his pulpit and practices a repentant speech that plays worse than a company’s tone-deaf press release. In one of many funny scenes, Trinitie sits in the spacious church with a “that’s all you got?” look on her face.

Supporting characters come in the form of rival couple Keon (Conphidance) and Shakura Sumpter (Nicole Beharie), who are also planning a reopening of their own church on… get this… Easter Sunday. Keon and Shakura are better at moral-mugging than their counterparts, but even they can’t hide the devil’s gleam in their eyes over the fact that the biggest fish in the local Christian sea has been harpooned and left for dead.

Honk for Jesus. Save Your Soul. could’ve used a few more belly laughs. Ebo strives for sharpness — a commendable feat — even if that sometimes results in the script targeting the low-hanging fruit or muddying to whom exactly this movie plays. For those who love to revel in hypocritic religious schadenfreude? Perhaps. But only so much can be extracted from the Childs’ prolific desire to horde enough periwinkle suits and gaudy hats to fill at least a dozen clothing stores. By the time things wrap up, we realize the film might not have a second gear. At least its first is mostly sustainable.

NOTE: Honk for Jesus. Save Your Soul. is now playing in theaters and streaming on Peacock.