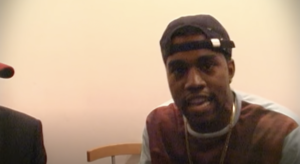 The treasure trove of never-before-seen footage of Kanye West that the first act of the new Netflix documentary Jeen-Yuhs alone has to offer will grip fans of his from the very first frame. Comprised of archival footage shot over 21 years, this massive, four-and-a-half-hour-project is poised to chronicle everything we love and loathe about one of the most iconic rappers of his generation: his extraordinary production, enviable lyricism, brilliant songs, swollen ego, rampant narcissism, and everything else in between.

Act I of Jeen-Yuhs — titled “Vision” — does more than just explore Kanye’s early years as a rapper. It showcases the intimate bond shared between Kanye and the directors of this project, Coodie & Chike. Chike remains mostly unseen. It’s Coodie, born Clarence Simmons Jr., who serves as the project’s narrator. After flailing at his initial dream of being a standup comedian, Coodie began hosting a Chicago-based cable access show called “Channel Zero” in the 1990s. He earns the bragging rights on being one of the few (many only) people profiling Chicago hip-hop during a time when everyone was more consumed by the buzzy west and east coasts. It’s also when Coodie met Kanye: an ambitious and gifted hip-hop producer, held in high regard by homegrown MCs, who was desperately trying to become an artist in his own right. Coodie did what he knew how to do: turn on his camera and keep it fixated on a magnetic personality.

Vision follows Kanye’s struggle to get a record deal, even after producing a handful of tracks for Jay-Z’s acclaimed album The Blueprint, as well as those classic salad day moments for an artist that consist of pouring up with the homies in ramshackle apartments while cutting tracks on mixing equipment that can do just enough. Externally speaking, however, I wasn’t prepared for how significant this project would be in detailing the foundation of Chicago hip-hop. A wealth of artists I myself and probably you haven’t heard of are seen. They show that long before Chief Keef and King Louie made Chicago the birthplace of drill music, a handful of talented spitters were laying the foundation.

Despite that, in predictable fashion, few stick around long enough to leave an impact. This is Kanye’s show and there’s no getting around that.

Jeen-Yuhs‘ first act features many memorable moments. There’s an extended section devoted to Kanye, Coodie, and their posse bum-rushing the New York office of Jay-Z’s label Roc-a-Fella Records in pursuit of a record deal. Beyond that, some seriously beautiful fragments detail the unbreakable bond between Kanye and his mother, Donda — who even casual Kanye fans know had an indelible impact on him as a man and artist. It’s clear early on, however, that Kanye has that indescribable “it” factor. You almost have to be unabashedly cocky, even arrogant, to be as persistent as he is despite a slew of rejections.

Kanye was a melodic, soulful rapper trying to make it with dimensional beats and lyricism when the aggressive sounds of DMX and Twista made up the rap stratosphere. I was unsure of how I’d respond to this documentary, given my current fatigue with Ye (as he’s legally known) in the modern day. Vision takes you back to a time when Kanye was not only an easier figure for whom to root, but reminds you why you still keep “Jesus Walks,” “Gold Digger,” and “Homecoming” in your rotation. Acts II and III are liable to get more insufferable, but — in quintessential Kanye fashion — I can’t help but eagerly wait for more.

NOTE: Jeen-Yuhs: A Kanye Trilogy will premiere on Netflix on February 16th, 2022.

This is absolute blasphemy, as it is obvious anything makes it an immediate perfect rating. Please update your rating to reflect as such or otherwise i will be contacting the proper authorities.