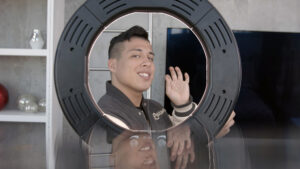 There is a multilayered documentary (or miniseries) to be made about TikTok, but Shalini Kantayya’s cleverly titled TikTok, Boom. — a play on Jonathan Larsson’s musical that saw a film adaptation by Lin-Manuel Miranda last year — just ain’t it. Lacking in focus and featuring pat glimpses into the lives of influencers, it raises real questions it has no idea how to answer. It lacks cohesion much like your own personal “for you page;” only it doesn’t analyze your face while you watch it (I don’t think, at least).

TikTok has been the fastest growing and most popular social media app for sometime now. With over two billion downloads, there’s a good chance it has a place on your phone. A powerful yet eminently controversial app, it’s the first of its kind in mastering the art of high quality, vertical video content. In addition, one of the most popular buzzwords associated with the app is “algorithm.” In short, it’s the tool that recognizes your interests and populates your homepage with videos in-line to your personal tastes; which it can discern in merely a few hours or days depending on the user’s time spent watching a video or what he or she “likes.”

TikTok’s status as a Chinese social media giant that’s revolutionized an industry long-controlled by Silicon Valley has entrenched it in geopolitical controversy almost from the jump. The app is owned by a company called ByteDance, and originated as a China-exclusive platform called “Douyin.” Following ByteDance’s acquisition of a lip-syncing company called Musical.ly, the two platforms were subsequently merged and TikTok was born. There’s nary an industry the app hasn’t disrupted: food, service, fashion, music, etc. It’s gotten to a point where its influence on the contemporary zeitgeist has been inescapable.

Only helping its popularity was Donald Trump using it as the latest lightning rod in the United States’ relationship with China, culminating with him proclaiming he would potentially ban the app in America. Once President Joe Biden was elected, that executive order was halted in its tracks.

Now arrives TikTok, Boom., a documentary that seeks to encompass all of this information and highlight more than a dozen creators who have seen their lives forever changed because of this app. We see a young Afghan-American woman find pride and acceptance in her culture; a beatboxer become a millionaire in the face of parental doubt; another young girl who posts scantily clad videos of herself and sees it as a middle finger to the sexist patriarchy; and a young influencer whose father helps cultivate his content in hopes of keeping him safe and relevant to a populous hungry for what comes with the next swipe up.

What unfolds is a messy tapestry of a digital world that is debatably too large to adequately showcase, especially in 90 minutes. Kantayya never lingers on a subject long enough for it to have an impact. The deluge of information is both too much and too little. Its collection of enormously popular creators also lacks coherence. It’s not that their stories are uninteresting; it’s the way they don’t fit together under any clear thematic umbrella. Furthermore, segueing from a beatboxer grappling with feeling unseen to a tech journalist discussing the unnerving access predators have to videos of underage children on the app comes across as a desperate crisis of form.

By the end, the only clear takeaway from TikTok, Boom. is the social media app itself is massive, ever-growing, and here to stay for the foreseeable future. You’ll likely end up wanting more development out of one particular story or another, although your appetite will be underserved. For me, I would’ve liked some more honest answers out of the influencers. There’s a snippet from one of the talking heads about how “social media influencer” is now the fourth-most desired job by elementary school students. That’s concerning given the prime requirements for that job are (a) looking attractive long enough for an online post and (b) convincingly performing happiness while concealing authentic sadness.

Perhaps public school curriculum should adopt some classes for tweens and teens about how to navigate the internet. Maybe stricter age regulations for the app should be adopted. Even the fact that the app is made by one of the most untrustworthy countries on the planet is grounds for greater concern. TikTok, Boom. doesn’t provide any kind of answers for what should come of TikTok’s massive popularity. Keep scrolling.