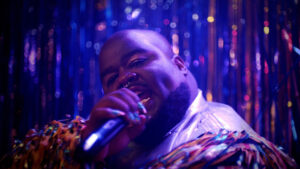 Official plot: A queer Black aspiring Baltimore rapper must outwit his vengeful day-job boss in order to avoid getting fired after accidentally eating an edible.

Review: I really hope Harris Doran’s F^¢K ’€M R!GHT B@¢K goes on to get the feature treatment soon. At least a TV series. Dapper Don Midas (also known as “DDm”) and Kara Young are just too likable to be contained in 15 minutes. There’s so much color and energy that would burst if given more time, but given its short runtime, Doran makes sure the palette is loud enough to match the personalities of the cast.

My favorite moment comes when the Netflix bill gets charged to Sammy’s account, successfully overcharging his bank account “You gonna charge me money for not having no money?” he says. “It’s expensive to be poor,” Young’s Yolanda replies. Sammy unleashes a rant as old as time. “Rich people need to pay the fees, they got the goddamn money. It’s like everything is set up to fuck you!” There’s only one thing to do when such circumstance is bestowed upon you. Fuck it right back.

Official plot: Exploring the director’s father’s chronic health problems, as a diabetic with kidney failure, and his mother’s role as his eternal caretaker, Chilly and Milly is a combination of 3D-modeled/composited characters, with cinéma vérité scenes from an autobiographical documentary shot over 13 years ago.

Review: Chilly and Milly is impressive enough on both emotional and aesthetical levels that it should serve its place as an heirloom of sorts for William D. Caballero and his warrior mother. The use of action figures is great, such as when Caballero opts for closeups that show needles going through his father’s hands to illustrate pain. Or even more surreally, recreates his near-death experience while using audio from his father’s testimonial regarding it. Most people’s home movies could put you to sleep. Caballero subverts the convention.

Official plot: In a quaint Padang restaurant, filled with people enjoying their lunch break, two bros put their friendship to the test when it turns out that only one plate remains of their favorite dish: The Rendang of Death.

Review: I’ve never eaten Rendang, which Wikipedia tells me is an Indonesian dish made up of meat, milk, chili, and ginger, to name a few ingredients. Apparently, it’s worth a fight if there’s limited supply. Rendang of Death isn’t much narratively, but it more than makes up visually. Don’t let its comparatively simplistic animation-style fool you. It’s of the breed of animated shorts that practically implores you pause and dissect its busy frames as an all-out brawl over the last piece of Rendang breaks out amongst a crowded lunch-crowd. It’s got Adult Swim-style bloodlust and absurdity in its veins, although it’s slight on dialog and, even for being merely seven minutes long, sometimes redundant in its conceit.

Review: You’ve Never Been Completely Honest is the scariest film of any kind of this or any other year. Using a mixture of reenacted footage and animation, it features a previously unreleased interview with a man who was part of a pyramid scheme in the early 1970s. He and several others were sent to a secretive seminar run by a company known as Leadership Dynamics Institute, where they participated in life-threatening group activities that were apparently conceived to reveal their more honest selves.

The lack of very specific information regarding L.D.I. in the day and age of the internet is nothing short of stunning. The interviewer and interviewee both harbor a dry, matter-of-fact vocal tone as the subject details the inhumane experiences at the seminar. Couple it with that unsettling hiss only 70s audiotape can provide, and some vivid live-action and animation context, and this is an incredibly distressing, exceptionally made short. We need a full-length documentary on L.D.I. Assuming there would be anyone brave enough to speak about it ever again.