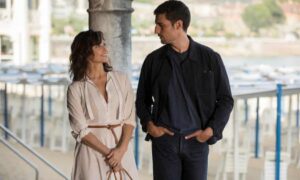 Someone make sure cinematographer Vittorio Storaro has the phone number of a good chiropractor. Once more, he winds up shouldering most of the weight on another sleepy Woody Allen doodle. His photography at least assures Rifkin’s Festival is easy on the eyes as it tells the meandering story of an uppity neurotic having little fun at a film festival, so preoccupied with his own mortality he can barely muster the energy to care that his wife is obviously sleeping with a young film director.

Allen regular Wallace Shawn serves as the writer/director’s stand-in, Mort Rifkin. Him and his publicist wife, Sue (Gina Gershon), are in Spain for the San Sebastián Film Festival. There was a time when Mort would take in films until he could no longer stay awake. Now, he’s a middle-aged curmudgeon, watching his wife cling to the side of a pompous French cineaste named Philippe (Louis Garrel). Like any good Woody archetype, he’s his own enemy when it comes to making the slightest effort at enjoying himself. He’s can’t shake the inevitability of death, nor his hypochondriac tendencies that lead him to paying a visit to a local cardiologist.

Enter Jo (Elena Anaya): a significantly younger doctor, for whom he falls almost instantly. Jo is in an open marriage, albeit a rocky one, with a painter named Paco (Sergi López). Mort sees her as a welcomed distraction on an otherwise slog of a trip. Jo sees him as a sounding board to voice misgivings about her flailing marriage, one burdened by so-called rewards on which she signed off but has yet to try to reap herself.

Despite mostly ignoring the crowded slate of films and pressers that come with San Sebastián, Mort begins experiencing vivid dreams of his own. They’re recreations of classic pictures, all of which Allen famously holds in high regard. There’s a sequence inspired by Fellini that replaces Italians with New Yorkers. There’s a Godard/Breathless callback that’s littered with jump-cuts as Mort and Sue discuss the possibility of a threesome. Of course, it wouldn’t be complete without a Bergman callback (The Seventh Seal) at the end, which is fittingly the best of the bunch — not only in style, but in the dialog Mort has with the knight. This knight is far more pleasant than Max von Sydow’s. He reminds Mort to stay away from processed foods and go for his colonoscopy.

Shawn’s persistent brooding and (let’s be honest) relatable malaise don’t manage to disguise the unshakable feeling that he’s been miscast. He’s too broad and blurts many of his lines. There’s little chemistry between him and Anaya, which makes the should-be-compelling midsection nosedive into aimlessness after what was otherwise a marginally entertaining first act.

But what feels particularly misguided is Allen’s knives-sharpened approach to pretentious young filmmakers. Don’t get it twisted: they do indeed exist. But they’re hardly trying to “reconcile the Arab-Israeli conflict” with their latest works in hopes to achieve world peace, as Philippe would lead you to believe. He feels like a strawman while Mort bemoans politically conscious cinematic efforts, arguing politics is “ephemeral” while missing “the big questions.” I just spent time indulging in Sundance efforts, namely one about a directionless college-grad and another that satirizes southern megachurch culture. Like one of those plastic pools you see in the summer, Woody: it’s not that deep.

If Allen wanted to needle Hollywood for embracing any and every IP they can find under a rock or on a comic book shelf, that’s one prerogative. To go after the new generation of filmmakers who are actively trying to say something by comparison feels unnecessarily cruel. A very “old man yells at cloud” way of projecting. Sure, the notions are a reflection of Mort’s cantankerous personality, but let’s not forget he’s a vessel for the same man who once gifted us dramas we could (and still) chew on for ages.

Besides, Rifkin’s Festival doesn’t harbor any grandiose revelations that suggest it would, say, be more entertaining than one of the films being show at San Sebastián either. Like Allen’s recent efforts — Café Society and A Rainy Day in New York — its micro-observations are greater than their macro-message. While it’s nice to see Allen fit iconic moments from Citizen Kane and Jules and Jim, the low-energy, perpetual lack of urgency here make it doubly tougher for the ever-reliable filmmaker to distract from the ceaseless outrage machine that finds a way to engulf him every year.

Rifkin’s Festival‘s biggest accomplishment, quite frankly, is that it saw a release at all, even two years late.

NOTE: Rifkin’s Festival is now playing in select theaters and on available to rent on various platforms.