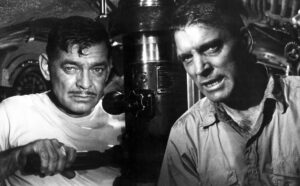 A straight-laced, albeit sweaty submarine thriller, Run Silent, Run Deep opens following a Japanese attack amidst World War II. Commanding officer Richardson (Clark Gable) is put in charge of the USS Nerka, which houses a steadfast crew led by Lieutenant Jim Bledsoe (Burt Lancaster), peeved by the fact he wasn’t granted the promotion. Richardson’s plans go beyond that of war. Harboring a hostile demeanor and an appetite for revenge, Richardson seeks to find and destroy the Japanese ship that sank his old vessel. “Sink first, ask questions later,” might as well be his underwater mantra.

The chatty, uninvolving first 30 minutes of Run Silent, Run Deep is liable to turn off a good majority of people. Deliberately paced, it meticulously characterizes Gable’s complicated commander and his unhealthy obsession with enacting revenge on America’s foreign rivals. John Gay’s aggressively gabby script hurls a lot of undersea jargon at audiences. Although it’s delivered with great conviction by Gable and Lancaster, they could be using entirely inappropriate terminology for all I know.

The bulk of the first half is devoted to the relentless drills Richardson forces upon his crew, who are used to the gentler hand of Bledsoe. These scenes are for the benefit of Gable, who emerges as the most developed shipman while the rest suffer from an interchangeable crop of overworked, underappreciated henchmen. Gable and Lancaster are mostly strong enough in their own rights to elevate the monotony.

Before you know it, sometime after Richardson experiences a concussion and is rendered bed-ridden, forcing Bledsoe to assume acting captain duties, Gay’s screenplay pivots into being exactly the kind of tense war-themed thriller it sets out to be from the jump. Despite gaps where waning interest becomes paramount, the direction of Hollywood veteran Robert Wise (who would go on to co-direct West Side Story) commendably juggles the dichotomous locations. Beyond the tight, claustrophobic quarters of this submarine is a vast, unforgiving ocean populated by massive battleships. At times we’re confined to the sub for so long that a mere establishing shot of the wobbly ocean feels like a literal breath of outdoor air.

Also in tow on the ship is Don Rickles in his film debut — a complete contrast from the kinds of roles which would be his bread-and-butter later in his career.

Most rewarding is the tonal shift in the final 20 minutes, where the crew of the Nerka must remain almost completely silent in order to avoid detection from a dangerously close enemy ship. Several torpedoes tunnel through the waters with explosions imminent. The end result is a decisively linear war flick with the benefit of two acting legends at the center: Lancaster, flaunting his trademark stoicism, and Gable, yet again showing his age for the better in one of his final performances.

NOTE: As of this writing, Run Silent, Run Deep is now available to stream on Pluto TV and Tubi, free of charge.