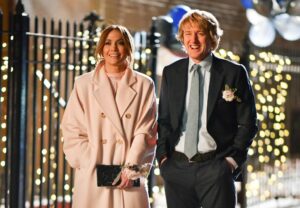 Kat Coiro’s Marry Me is the equivalent of cinematic empty calories, but it still won’t remain on your thighs like a box of chocolates. It’s made fun thanks to two effortlessly charismatic leads. We all know both Jennifer Lopez and Owen Wilson can charm a dog off a meat-wagon on their own; put them and their opposite energies together and Coiro (and the three credited screenwriter) can practically coast. Plus, all romantic movies should end with a Mathalon in the robust town of Peoria, Illinois.

Adapted from Bobby Crosby’s graphic novel, Coiro’s Marry Me — her first feature-length directorial effort since A Case of You in 2013 — is less a romantic comedy and more a showbiz fantasy involving a superstar celebrity and an ordinary citizen. Jennifer Lopez plays Kat Valdez, who, much like herself, is a famous popstar whose personal life has intersected with her public one. Her and her bad-boy fiancée named Bastian (Colombian singer Maluma, who most recently voiced a small part in Encanto) feed the wolves by deciding to turn their wedding into a massive concert event. They’ll perform their new duet “Marry Me,” exchange vows, and get married in front of hundreds of thousands of roaring fans and even more across multiple social media platforms.

Literally moments before Kat arrives on stage in her wedding dress, ready to say “I do,” she discovers Bastian has been having an affair with her assistant. Overwhelmed by the disillusionment, Kat sees a kind but bland math teacher named Charlie (Owen Wilson) in the audience and weds him instead. In an effort to pivot from the cheating bombshell, Kat agrees to stay married for Charlie for a few months to see if this attempt at spontaneous love would be better than her past ones. The two couldn’t be more opposite, however. While Kat’s entire life is one “#ad”-sponsored Instagram video after another, Charlie juggles raising his preteen daughter Chloe (Chloe Coleman), his friendship with the school guidance counselor (Sarah Silverman), and coaching the math team to the finals.

The bulk of Marry Me highlights the alternate worlds in which this unlikely couple resides. It helps that Lopez and Wilson are comfortable enough in their own skins that the few-and-far-between private moments they share do channel some grin-inducing chemistry.

One can see Kat Valdez as a thinly veiled recreation of Lopez. She tells Charlie of her multiple failed marriages (consider her recent separation from Alex Rodriguez, or Ben Affleck), and adds, at one point, that she’s never been nominated for anything (missing from Lopez’s trophy case is an Oscar). While she’s probably not going to be nominated for this, Lopez’s Kat isn’t a dim-bulb celebrity. Like most of her characters, she’s uber-successful, yet sometimes lacking in confidence. It affords the romance at least some depth.

A subplot about Chloe’s past stage-fright during the aforementioned math competition has Kat recalling her own insecurities on-stage, which at one point leads to Charlie’s entire class breaking out in a livestreamed dance-party with Kat at the helm. As trite as it may seem, Coiro knows how to direct it with energy and spunk. Marry Me is the definition of rainy Sunday viewing. It’s comfort food for the soul; inoffensive enough to recommend with a wink and a nod that there are smarter, more substantive works out there.

NOTE: Marry Me is now playing in theaters and streaming on Peacock, with a premium subscription.