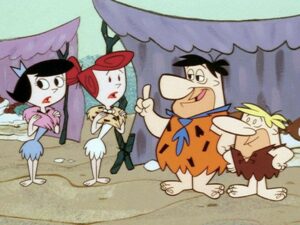 One of a handful of unhealthy habits I have is staying up past my bedtime researching lost media, further cutting into my sleep thinking about where (or sometimes “if”) certain movies or show still exist anywhere in the world. Such a habit has led me to Cry Baby Lane, Nickelodeon’s thought-to-be-lost original movie, Sammy, a recently unearthed animated NBC show from David Spade, and now, The Flintstones: On the Rocks, a seldom-remembered Cartoon Network special.

Some background: On the Rocks premiered on Cartoon Network in November 2001. It never aired in the United States again; it was rebroadcast in Japan the following year. Helmed by David Smith and Chris Savino (recently disgraced animator behind Nickelodeon’s The Loud House), the hour-long special intended to be a callback to the roots of the 1960s Flintstones program — essentially a remake of The Honeymooners targeted more towards an adult crowd. With that, the tone of this special is notably darker than the Flintstone family you probably picture in your mind.

Fanfare for On the Rocks was minimal, and its failure (intended by Cartoon Network or not) put the kibosh on The Flintstones until 2015, when Hanna-Barbera partnered with WWE Studios to make whatever The Flintstones & WWE: Stone Age SmackDown! is. Having never been formally released by Warner — despite their “Warner Archive” label being made for such oddities as this — the only way to watch it is through those sketchy, international streaming websites. Proceed with caution (also known as AdBlock).

The film drops us into the middle of an argument between Fred and Wilma (voiced by Jeff Bergman and Tress MacNeille, respectively) while they’re visiting their marriage counselor (who looks like the first-draft of Madame Foster from Foster’s Home for Imaginary Friends, but that’s besides the point). Wilma is tired of Fred’s nasty attitude. Fred is sick of Wilma’s nagging. Just when things seem irreparable, Barney and Betty Rubble (Kevin Michael Richardson and Grey DeLisle) arrange a trip to “Rockapulco” in an attempt to save their marriage.

Surrounded by “Roxicans” (an actual term used here), the Flintstones and the Rubbles run into a number of hiccups, one of whom being a jewel thief (Jeff Bennett). The stolen diamond necklace falls into the hands of Wilma, who thinks it’s an apology gift from Fred. Then there’s a suspicious dame who catches the eye of Fred. His eyes can’t help but wander even if his marriage is…you get the idea.

It’s very possible On the Rocks was conceived as something to show during “Adult Swim,” Cartoon Network’s adult-oriented nighttime block, which was merely two months old when this premiered. Its dark humor would explain it. There are a number of suggestive scenes. Fred ogles the behind and legs of that aforementioned mystery woman. Sex is alluded to more than once. The way Fred and Wilma argue plays less to our sense of humor as opposed to our sense of concern. Fred is such an unlikable cad throughout much of this movie that it becomes a joke in itself that the writers would dare try and redeem him in the facile final minutes. This goes beyond a spunky creative decision to the point you have to wonder what the hell they were thinking.

Viewing it in the present, On the Rocks does flaunt that early angular style of animation, which gave Cartoon Network a distinctive visual edge over its rival Nickelodeon. Some of Fred’s xenophobic bits are funny simply because they’re so brazenly uncouth, as is much of this deservedly forgotten (but no less curious) piece of history.