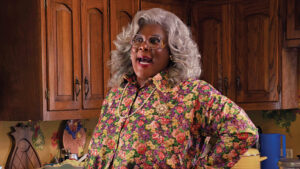 It was three years ago — on this very date actually — that I watched and reviewed A Madea Family Funeral. At the time, Tyler Perry declared it would be the final movie in the “Madea cinematic universe” (it’s a thing, Wikipedia tells me so). Unsurprisingly, it was dreadful, as most movies featuring Perry’s gun-toting granny alter-ego are. But like a blue moon, a solar eclipse, or a cat vomiting on hardwood floor as opposed to a rug, a good one comes along.

A Madea Homecoming is the second-best “Madea” movie by my estimation; A Madea Christmas remains my #1 and I will not be taking any questions at this time. It’s shocking to say such a thing after I wrote this in my review of A Madea Family Funeral: “So few franchises are this consistently good at being so consistently bad, and Tyler Perry has nursed this baby out of the crib, to the bank, and back.”

There’s a lot that works in Homecoming‘s favor. The introduction of adequately developed supporting characters is one. Perry scaling back on the overwrought melodrama is another. But maybe most importantly, this is both Perry and Madea at their most liberated — for the better. Perry doesn’t have to softball his material for leery executives who desire a PG-13 product. Homecoming is vulgar, although not oppressively so. Not only does Perry have more creative freedom (despite already harboring more than only a handful of veteran American filmmakers), he also exercises some restraint with the language.

Perry dons the blouse and wig with a newfound energy that suggests that every time Perry teases a Madea retirement, he’s simply exhausted or momentarily out of ideas. Save for some very goofy, sometimes comically bad transitions, the entire production surrounding A Madea Homecoming feels rejuvenated, separating itself almost instantly from the past trainwrecks.

Uncle Joe has never been funnier, by my estimation. Aunt Bam’s sometimes grating demeanor is marginalized enough that her lines have more impact. I can’t speak to the authenticity of O’Carroll’s import-character Agnes, but she earns her laughs with both physical and fish-out-of-water comedy. Tim and Davi feel humanized as well, and the film takes on a more empathetic angle when one character gets something off his chest. Despite arguably the most explosive climax of any Madea movie yet, Perry doesn’t posture the evildoers the way he often does. Instead of browbeating them with awful circumstances and moral condescension, he sets them on a path for redemption — although not without a few barbs from the infallible matriarch.

As if he’s a juggler who finally learned how to keep three balls in the air at once, Perry shows more deftness at incorporating topical comedy in the mix. Early, there’s a hostile debate between Joe and a relative (Candace Maxwell) regarding police brutality/Black Lives Matter, as funny as it is even-handed. Then there’s instant humor in the Madea family’s colossal misinterpretation of the word “knickers,” as uttered by Agnes. Joe and Madea are ready to throw hands and cock pistols, but in no time, they’re sharing weed and wisdom.

Is Tyler Perry the most consistently inconsistent director? Absolutely. To say A Madea Homecoming will set a course for a new era of very good movies of this franchise is far-fetched at the least. That said, it would be kind of a shame if he put the character to bed all together. You just need one good outing to remind you the potential this character has when its creator and performer is firing on all cylinders.

NOTE: A Madea Homecoming is now streaming on Netflix.