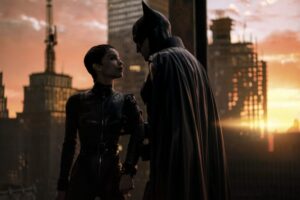 Matt Reeves’ The Batman can essentially be split into two acts. The first is a gritty detective story that has Batman traversing the ugly city streets in hopes of decoding the Riddler’s many riddles. The latter is a psychological thriller, as legitimately terrifying as any true horror movie.

Cut from cloth similar to Joker in both mood and visuals, The Batman guides Bruce Wayne (Robert Pattinson) so close to the edge of self-destruction insofar that he becomes a pressure cooker of brooding rage. Despite giving us yet another iteration of the iconic Dark Knight — our third in under 18 years — Reeves and co-writer Peter Craig posit the psychological undercurrent just as significantly as they do the crimefighting. What results is a melting pot where both are portrayed in gripping fashion.

Bruce Wayne has already been serving as Gotham City’s Batman for two years although he isn’t much successful in mitigating its reputation as a crime-ridden cesspool. His relationship with local law enforcement is frosty, save for Lieutenant James Gordon (Jeffrey Wright), with whom he regularly collaborates. Gotham’s finest concede some powers to Batman once a series of grisly, politically-motivated murders start occurring at the hands of a man who calls himself the Riddler (Paul Dano).

The disappearance of a young woman eventually leads Batman to a nightclub owned by a mobster named Cobblepot (Colin Farrell). It’s there he meets Selina Kyle (Zoë Kravitz), a cat-burglar with ties to powerful crime lord Carmine Falcone (John Turturro in another damn-fine performance). As Batman and Gordon comb through the findings, they realize the Riddler’s crimes are connected to a famous indictment in Gotham’s history — one that directly implicates Wayne’s slain parents. The Riddler is as dastardly a villain as they come, livestreaming his crimes for the world while hunkering down in an unlocated abode.

Let’s talk about Dano’s Riddler, quite possibly the most unnerving comic book villain on-screen since Heath Ledger’s Oscar-winning performance as the Joker in The Dark Knight. The Riddler’s first major appearance comes during a populated funeral when a vehicle plows through the doors and comes to a halt after crashing into numerous chairs. But it’s not the Riddler driving the vehicle. It’s Gil Colson (Peter Sarsgaard), Gotham’s slimy district attorney, who emerges from behind the wheel with an elaborate collar-bomb around his neck. A cell-phone is taped to his hand. The Riddler wants to Facetime.

What unfolds is a bone-chilling sequence thanks to the atmosphere it conjures, the Riddler’s guttural voice, and the information therein revealed that sets the ball into motion for another terrific Batman movie.

Reeves — most famous for directing two of the three recent Planet of the Apes sequels after getting our collective attention with Cloverfield in 2008 — and Craig more-or-less take the template of Se7en and install it into the comic book framework. It’s better than the pretentiousness that move might suggest. In the hands of a craftsman who has spent the last several years making visually striking and narratively dense blockbusters, Reeves brings that same commitment here. The police procedural elements and the act of solving the riddles, be them through intense interrogations (some of which following explosive car chases) or a lot of detective work, are just as fascinating as the combat. We’ve seen Batman kick ass time and time again. Intelligent storytelling doesn’t go out of style.

Credit to the aforementioned duo for finally giving Catwoman something to do as well. Kravitz strikes the right mix of cunning and sexy, and the underlining romance between her and her counterpart doesn’t play like shoehorned schlock either. Pattinson rises to the occasion yet again for another role that shows he deserves to be more than the Twilight heartthrob we boys loved to hate growing up. And what else can I say about Dano? Rarely has such a boyish actor been so consistently menacing. He’s an excellent Riddler. I hope it’s not the last we see of him in the role.

Gotham politics are brought forth in such a way that they make the interworkings of Chicago and New York seem like a utopia. The fledgling face of the hopeless city is mayoral candidate Bella Reál (Jayme Lawson), the latest in a line of wide-eyed politicians who believe they have the answers to fix a broken city. Spoiler alert: they don’t. Even Batman’s own sense of vengeance is tested in scenes where he appears as despondent as the city in which he resides. The Riddler has some hard truths for him when they come face-to-face as well. The worst part is, he absolutely has a point.

The Batman‘s climax is head-shaking in its evilness. At three hours and already a tad overlong, it feels contradictory to say it unfolds a bit too quickly given the time spent on the detective and psychological elements. But rather than end with a fire-and-brimstone battle, it begins to wrap-up with a more striking image: one of Batman trying to save a city one person at a time. And taking his time while doing it. That’s the icing on an already delicious cake.

NOTE: The Batman is now playing exclusively in theaters.