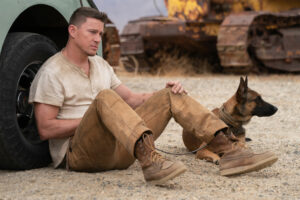 It feels like we get movies like Dog every year because we do. Movies about military dogs have introduced us to the likes of military K9 handler Megan Leavey, Sgt. Stubby, and now a fictional Belgian Malinois named Lulu. Channing Tatum’s first directorial effort — alongside Reid Carolin, a frequent producer of Tatum films, also making his directing debut — isn’t groundbreaking, but it’s completely serviceable and often whimsical thanks to its supporting cast.

Man’s best friend remains undefeated in making a charming co-lead in movies about the boundless connection that can be achieved between human and canine. And this is coming from a tried-and-true cat person.

Billed as a buddy comedy but far more functional as a drama, Dog revolves around former Army Ranger Jackson Briggs (Tatum), who strives to get back into the Rangers as soon as possible. Sure, his time in combat has left him with some permanent damage, both internally and externally, and his doctors advise against returning to battle, but these are all moot points as far as he’s concerned. A heavy drinker who finds his gas station sub-shop job more detrimental to his overall health, Briggs wants back in, but he needs a sign-off from an officer to be reinstated.

He finds one willing to scribble his John Hancock if Briggs can deliver an Army dog to the funeral of a veteran who served alongside him. Enter Lulu, a sweet-faced Malinois with many a brave mission under her belt. Lulu has her own scars, however. She’s so traumatized by what she’s seen that no one can get near her; she’s sent three people to the ER and is left muzzled, on a heavy dose of downers. After the funeral of her soldier, she’s scheduled to be euthanized.

Briggs is willing to do anything for reinstatement, but he doesn’t want to do this. It’s not a flight him and Lulu are scheduled to catch either. Briggs must embark on a road-trip from Oregon to Arizona in time for the service. Naturally, there will be problems, including a run-in with a snippy police officer (played by Bill Burr) and a near-death encounter with a protective homeowner (Kevin Nash doing his best impression of Stephen Lang from Don’t Breathe). There will also be emotional callbacks once Briggs cracks open the notebook left by Lulu’s handler, which includes a “greatest hits” DVD, which practically sedates Lulu whenever it plays.

Dog is a movie geared towards those individuals who have an animal-centric bumper sticker on their vehicle that says “who rescued who?” and are incapable of answering that questions. Both Briggs and Lulu are both wounded warriors that find healing in one another. Strengthening their bond are some engaging moments, such as when Briggs impersonates a blind man with a war-dog in order to secure a lavish hotel suite. Also accentuating their journey is some gorgeous photography showcasing the northeastern/western countryside (cinematographer Newton Thomas Sigel has seldom found a locale he couldn’t beautifully capture).

When we do get to the funeral, it doesn’t last more than a few minutes. All the expected inclusions are there — the 21-gun salute, the delivery of the folded American flag — but its brevity reminds us the destination wasn’t the point. It’s the journey between two battered, not broken souls.

Dog is a difficult movie to dislike ardently, as cliché as it often is. Carolin and Tatum clearly harbor great affection for this story. The narrative surprises are practically nonexistent, but the trip’s predictable layovers are afforded a touch of whimsy, such as when a psychic Jane Adams gives Briggs better insight on how to stabilize Lulu. Ethan Suplee — and his new, enviable physique — fits the bill as a former Ranger who is aghast to learn that Briggs has yet to experience a “Lulu hug.” As for Tatum, he’s one of the most modest movie-stars of our generation. His hunky demeanor suggests your average meathead when he’s actually a sensitive, eternally charismatic actor, capable of wearing a handful of different hats. And I must reiterate how perfect Bill Burr is in his role as a cop, specifically how he segues so smoothly from hard-ass to empath to interrogative back to hard-ass all in under two minutes.

Bottom line: if you think you’ll like Dog, you most likely will.