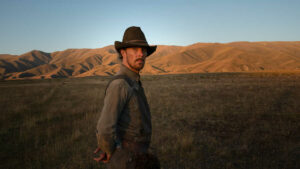 The Power of the Dog tells a compelling story in start-and-stop fashion. What do I mean by that? When you start getting invested, your sense of intrigue eventually plateaus as the film hits a lull. It could be due to long stretches without dialog or seemingly inert moments where dramatic tension is lessened. I can’t blame anyone for not being able to ride the wave of it. Even as someone who loves a quality slowburn story, The Power of the Dog is one that is sometimes too slow to let its fire burn.

A “Romulus and Remus” story divided into several chapters, The Power of the Dog follows Benedict Cumberbatch’s Phil Burbank, the rough-and-rigid counterpart to his gentler, more amiable brother, George (Jesse Plemons). The two are ranch-owners who have struck it rich in mid-1920s Montana, and while Phil’s callousness not only irks but pains George, he does little other than segue to the next subject — providing he even has something to stay. When the two men, accompanied by a host of other ranch-hands, stop at a restaurant, they meet Rose (Kirsten Dunst), the widow who runs the joint, and her son Peter (Kodi Smit-McPhee). Phil bullies Peter to the point where the ordinarily stoic young man walks out and leaves his mother in tears.

Cue George, who reaches out to comfort her and eventually falls in love with her. The thought of his brother “replacing” him incenses Phil. As if George is really so entitled to think he needs a complement to his life; one who doesn’t refer to him as “fatso” more than his legal name. In lieu of this, Phil increases his intimidation of Rose and Peter whenever they should cross paths. His eyes stalk their movements like a hawk zeroing-in on helpless prey. That is until Phil tries to catch flies with honey and takes a liking to Peter. He informs the kid he’s making a rope for him to use, and later tells him stories of his mentor, “Bronco Henry.”

The Power of the Dog almost completely rejects plot progression, trading it instead for a nuanced look at changing power/relationship dynamics over the course of time. There are no flashbacks, although references to the past run amok. Writer/director Jane Campion (directing her first film since Bright Star in 2009) fills in some narrative gaps by way of symbolic storytelling. Objects her camera favors, such as past trophies or old photographs, are our substitute for interruptions in the linear story. For example, Phil namedrops “Bronco Henry” so much that if there were indeed a real-life hero by this name, his surviving kin should consider filing for royalties. It treads dangerously to being a parody of Westerns in that respect.

This approach would seriously fall short if the performances weren’t up to snuff. Thankfully, most of them are, although the weak link is Cumberbatch. At 45-years-old, he feels much too young to be this damn old. It’s the opposite issue Clint Eastwood experienced in last year’s Cry Macho, where the veteran actor felt about 40 years too old to be playing the lead in that movie. I’m aware my affinity for Michael Shannon borders on fanatical, but he would’ve been a much better fit as Phil. Shannon is merely two years older than Cumberbatch, but the former could’ve ingrained a sense of meanness through scowl and presence that Cumberbatch just doesn’t seem to possess, no matter how much dirt and grime is on him and his clothes.

Plemons and Dunst unsurprisingly spark palpable chemistry — they should, they’re engaged and have been together since 2016 — while Smit-McPhee’s meek Peter is given an avenue of relatability for the audience. He gifts the character a methodical evolution towards confidence, on top of the winsome protection of his mother. Peter is caught in the crossfire of Phil’s age-old masculinity, while Phil wants no part of the cosmopolitan life him and his mother share. Smit-McPhee holds up his end of the bargain.

Here, New Zealand is filmed to look like Montana and succeeds thanks to cinematographer Ari Wegner’s (Lady Macbeth) camera being in love with the scenery. Wide-angle shots detail the vastness of the plains; the landscapes inspire beauty and ominousness, which make The Power of the Dog awe-inspiring even in its most ponderous moments. Jonny Greenwood’s score is attractively minimalist in contrast, favoring deliciously modest string compositions that do indeed set the mood, especially when they’re forced into the foreground at times due to long stretches where dialog is sparse or completely absent.

All of this works to make The Power of the Dog a tone-poem, a movie that inspires you to feel more than it strives for you to understand it. What you come away with is sometimes the purpose of venturing down many cow-paths and winding rivers in search of answers to questions you can’t quite articulate. It’s an occasionally ponderous two hours, and Campion tasks her audience to color in a lot of seemingly empty spaces. I found myself more invested in the first hour than the second, probably because by the fifth chapter, it all starts to feel like a muchness. If you can stay patient, you might be rocked by a novel twist, although given the temptation that is Netflix’s large library (in conjunction with fleeting time), I’d hedge my bet on whether or not most will make it that far.

NOTE: The Power of the Dog is now streaming on Netflix.