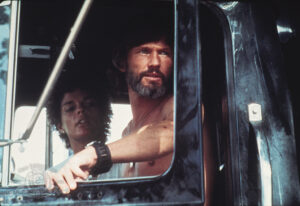 C.W. McCall’s 1975 hit song “Convoy” is one of the most unique and different songs to ever come out of the country genre. Its unique blend of citizens band radio (CB radio) dialog combined with a catchy, spoken-word story about a group of rebellious truckers that decide to disobey all road signs, law enforcement, and trucker policies to just be one with the road, their trucks, and their individualism, which eventually results in the creation of a trucking convoy makes for a song that does nothing but get ones energy flowing and their excitement flourishing. Throw in inanely catchy instrumentation, trucker lingo appropriately imitating life on the road, and McCall’s fittingly deep vocals and you have a song that just works on sight and creates a wonderful and original vibe.

Adapting McCall’s novelty song into a film bearing the same name was a wise choice because the song is so much a story and full of sometimes ambiguous lingo that showing how something like a trucker rebellion would play out if it were to happen only makes sense. The film follows McCall’s hit nicely, as it focuses on a deviant trucker nicknamed “Rubber Duck” (Kris Kristofferson), who bands together with his road-friends “Love Machine” (later nicknamed “Pig Pen,” played by Burt Young), and “Spider Mike” (Franklyn Ajaye) to protest the corrupt ways of Sheriff Lyle “Cottonmouth” Wallace (Ernest Borgnine), by driving their trucks at top speed to the state line of New Mexico and as far as they can possibly go. Also on board with “Rubber Duck” as a passenger is Melissa (Ali MacGraw), who initially tempts him by driving without pants in a Jaguar convertible at top speed down the road. The gaggle of truckers eventually start a convoy, made up of truckers from all over the country, “long-haired friends of Jesus in a chartreuse microbus,” among many others who are riding in protest of police corruption and the pursuit of individuality.

Sam Peckinpah directs Convoy with a necessary sense of fun, gusto, and clear enjoyment, filming many shots of truckers and their drivers flooring it down interstates, weaving in and out of traffic, and even working to stop law-enforcement by using two eighteen-wheelers to crush a police cruiser flying down the highway at top speed. In addition, Peckinpah works to develop the relationship these truckers have with their roads, but also each other, even if their friends exist predominately as voices on the other end of a scratchy CB radio, spouting slang and vague phrases at each other hoping to achieve a goal only a select few will understand. The individualism in the film is nearly unmatchable, as we see that “Rubber Duck,” “Pig Pen,” and “Spider Mike” have a genuine love for what they do and, as McCall stated in his song, “ain’t nothin’ gonna get in their way.”

On top of that, the film is filled with talents that are fun to watch, specifically Kristofferson and Borgnine, two instantly recognizable actors in roles they were built to play. Watching the film and seeing their relationship develop over time is a real treat because you can see the way each of them respond to each others quips and acts of deviancy and disobedience. On top of that, the supporting cast of Young and Ajaye are entertaining, especially in the early scenes in the film, where the central focus is on their dialog with each other. Last, but certainly not least, is MacGraw, who does a beautiful job of holding her own, being the only female lead in the entire film.

Convoy also has the ability to surprise by becoming a surprisingly deeper story during the film’s last act, addressing issues of racism, opposition to individuality and rebellion, and corruption within a system with a sense of honesty and seriousness. For a film that bears such an asinine premise and a cheesy aesthetic, it’s easy to not expect this particular film to bear such a notion of competence in terms of illustrating a moral. But that is only one of several ways Peckinpah’s Convoy surprises as it lives up to a terrific song and terrific idea in an entertaining manner.

NOTE: Convoy is available to stream on Pluto TV and Tubi, free of charge.