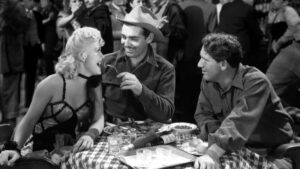 Like any oil baron, the “Johns” have come to town seeking untold riches. Square John is engaged to Betsy Bartlett (Claudette Colbert), and the two (mainly John) envision a life in Texas once they’ve solidified the business. But Betsy unexpectedly comes a-knockin’ to the developing locale and falls hard for Big John. Like only the men in pictures do, Square John cuts his losses once marriage between the two seems inevitable. Only that lasts for about a year when he suspects that Big John is stepping out on little ol’ Betsy. This creates a divide for the two, and it’s hard to mine the fields when there’s increasing resentment and distrust between the men.

Eventually, Big John enters the refining/distributing business, falls for another woman, and gets indicted under anti-trust laws leaving Square John is the only person who can somehow mend all of these rough edges all while accepting the perfect life that was so perfect it eventually became out of reach.

Boom Town is glossy 1940s melodrama at its most unapologetic. Its thin, repetitive story is elevated by a more-than-capable trio in Gable, Tracy, and Colbert. All of whom afford the soapy setup a lot more weight and polish than it might deserve.

If you’re a Gable fan like myself, you’ll find an interesting parallel insofar that Gable and his father worked in the Oklahoma oil fields in the 1920s. A young Gable was a wildcatter long before he became “Big John,” and he was tasked with removing sludge in the fields before he traveled to the Pacific Northwest. It explains why his performance reeks of passion and authenticity from the jump. Between the two, however, it’s Tracy who proves to have greater range, cycling between unhinged and composed, sometimes at the drop of the hat. Colbert’s eloquent charm and vibrant beauty is a welcomed contrast between the two fast-talking barons, who speak like people in these movies so often do: as if they have to fill a quota of 100 words/minute.

Boom Town is longer than it needs to be — two hours makes this feel much too redundant, plot-wise — but efficiently acted and staged. It needed some sludge removal in the screenplay department. There goes Gable once again coming full-circle with his acting career.

NOTE: Boom Town is available to rent on a variety of streaming platforms.