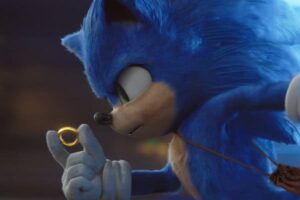 I’m beginning to sound like Pete Repeat when discussing nearly every new kids movie developed from a nineties-era property, but Sonic the Hedgehog is yet another film that feels 15 years too late. Much like Captain Underpants, Ratchet & Clank, and Playmobil: The Movie, this is another case where the respective studio (Paramount Pictures) sat on the rights and dawdled with the material long enough for its original target audience to have kids of their own. I have no idea whether or not young children still play games featuring the blue hedgehog, but what I will opine is that had this film been made in the early 2000s, it would’ve felt fresher and more palatable.

Sonic the Hedgehog is the peculiar case where a film gets the framework right but not its screenplay. Dropping Sonic in a remarkably unremarkable town in Montana was a decision quirky enough to work; same with giving Jim Carrey the role of Dr. Robotnik and just letting him run with it at 100 mph. It’s unfortunate the dialog here is comprised almost entirely of quips, and the film furthers my assumption that the Deadpool formula is officially tired. Not every character needs to be so blatantly hip and rebellious they’d make Bart Simpson bill them as a poser.

The plot: Sonic (voiced by Ben Schwartz) crash-lands on Earth after escaping his own planet as a child thanks to the golden rings that serve as portals and allow him to travel to any locale. Indeed, of all places, he lands in Green Hills, Montana, growing up a largely unseen observer of small-town life. He’s a people-watcher because what the hell else is a lightning-fast hedgehog going to do on Earth? Sonic’s two favorite characters around town happen to be Tom (James Marsden), a local police officer he calls “Donut Lord,” and his wife Maddie (Tika Sumpter), a local vet known as “Pretzel Lady.”

Tom’s life as a cop in a sleepy town is less than captivating, at least until he’s offered the opportunity to join the San Francisco Police Department, where he might actually get to do something besides sit at a speed-trap most of his shift. On that fateful evening, Sonic gets wound up after a Little League game and creates a power outage so widespread it gets the attention of the U.S. government. Officials bring in Dr. Robotnik — Dr. Eggman by my recollection, but I feel the internet has already hashed that one out — a brilliant madman who rounds up a technological army of machines in order to find the source. Sonic and Tom cross paths, and through a series of unfortunate events, Sonic’s rings wind up in San Francisco, Robotnik knows he’s responsible for the power outage, and both characters hit the road to obtain the rings.

Nitpicks aside, kudos to the tireless VFX team, who weathered a firestorm of controversy in regards to Sonic’s initial design, and likely spent many sleepless nights course-correcting their work. The original Sonic looked like the ugly brainchild of a humanoid hedgehog and the worst outcome of the uncanny valley aesthetic. Having to watch an entire movie with that thing as the primary character would’ve really made the experience unbearable.

Sonic the Hedgehog, by all accounts, is like its titular video-game icon: full of energy while occasionally leaving you susceptible to fatigue. The biggest issue is the dialog, which plays like a collection of punchlines and quips asserting the character’s hipness at every turn. Sonic is a cocksure character by nature, but even his attitude wears one down when he’s a know-it-all one minute and then bemoaning his lack of friends the next. He’s essentially tailored as a Deadpool clone; another smarmy wise-cracker who constantly reminds you that he’s an edgy, self-aware creature. Maybe this is the consequence of having Sonic enter the cold real-world, but watching him interact with humans as bland as Tom and Maddie makes you wish Knuckles, Tails, and Amy would appear, take Sonic to a new planet, and show him what fun really is.

The saving grace is Jim Carrey, who gives us a throwback role of sorts by embracing the eccentric nature of Robotnik with the poise he brings even the silliest characters. With his curled mustache, loud expressions, and condescending nature, he’s the ideal antagonist insofar that even if his motivations are cliche, whenever he’s on-screen, you lock in because he’s an unpredictable force of charisma in spite of himself.

There’s fun to be had, even if it is too intermittent. The first half had me marginally amused, up until the point when Sonic was kept in the passenger seat of Tom’s truck and the film became…too realistic, in a way? To confine Sonic to a car-ride seems so counter-intuitive to the spirit of the character. A mid-credits scene leaves hope that the inevitable sequels will give us more time with Sonic and his litany of other extraterrestrials as opposed to making him coexist alongside forgettable bores.

NOTE: Sonic the Hedgehog is now streaming on Paramount+.

My review of Sonic the Hedgehog 2