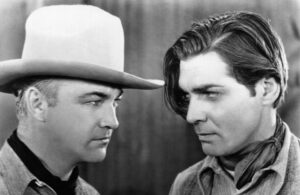 Here’s a story you seldom see: two cowboy friends happen upon an abandoned baby in the back of a covered wagon in the dead of the Arizona desert. The two men take an instant liking to the boy, fight over who shall retain custody, and then the inevitably decision leads to the men having deep contempt for one another. Somewhere at sometime, a single mother must’ve watched The Painted Desert and thought to herself something along the lines of, “if only men put up that much of a fight about a child.”

The two cowboys are Jeff (J. Farrell MacDonald) and Cash (William Farnum). Cash winds up prevailing, and his adoptive son has now group to be Bill Holbrook (William Boyd), who works alongside him on his cattle ranch. Jeff remains in the area, having now established his own ranch, which rests on the land where him and his former friend found the boy. Jeff lives with his grown daughter, Mary Ellen (Helen Twelvetrees). All’s well with the two men’s separate existences until Cash wants to use the precious waterhole on Jeff’s property. Now, two decades of animosity come to a head with Bill, Mary Ellen, and Jeff’s vagabond cowboy friend, Rance (Clark Gable), caught in the middle.

Most people with eyes can see where this story is headed. It’s your prerogative if you want to wait it out and watch it unfold. The Painted Desert is quite possibly the longest 75-minute film ever made. It’s indignant to the idea of pacing, so much so that the performers’ line delivery is stiffer than steel. At times it creates the illusion the film is moving in slow motion. Released in 1931, this was an early talkie (it’s actually Gable’s first), and it’s clear even such greats as MacDonald and Boyd hadn’t mastered their Mid-Atlantic accent quite yet.

Barely rescuing the movie is the workhorse cinematographer Edward Snyder, who gifts an unworthy script some visual beauty thanks to his solid use of the Arizona desert. I’ll be unable to successfully claim unbiased here, but Gable cashes in the best performance of the bunch. There’s nothing here worthy of a highlight reel, that’s for sure. But he shows the fledgling birth of his conviction and enviable charisma that would make him the Hollywood Legend he is.

The genre of Westerns is so vast and acclaimed that it’s easy to see why something like The Painted Desert is barely worthy of a footnote in the filmography of nearly everyone here.

NOTE: The Painted Desert entered the public domain decades ago, and is available to view in its entirety here.