I remember in 2005, as a young child who was just being acquainted with the internet, learning about Lawrence Kasanoff’s Foodfight!. The film seemed unlike anything I had ever heard of before, combining dozens of popular advertising mascots such as Mr. Clean, Chester Cheetah, Mrs. Buttersworth, and Charlie the Tuna into one film that would resemble Toy Story if its setting had been transferred to a supermarket. The story of the film is actually one of cinema and animation’s most baffling stories of a film’s time in development hell and still captivates me whenever I scour the internet looking for a summation of what exactly went on with the picture. The story is one of incredible ambition, controversy, and an unfathomably disappointing conclusion. If you’re not familiar with the backstory, I’ll give you a little rundown.

In 2001, director Lawrence Kasanoff, who was known for producing the Mortal Kombat films as well as a handful of TV adaptations on the franchise, announced an undertaking like no other – he was going to make an animated film under his own company Threshold Entertainment that focused on the events that would take place inside a supermarket when the lights would turn off. Kasanoff envisioned a spectacle like no other, centering on dozens of recognizable brand mascots that would fend off a new, evil brand that attempted to takeover the marketplace. Not only was a film planned, but merchandize-galore was in addition, with toys, stuffed animals, a potential web show, commercial tie-ins, fast food toys, books, and more were also planned to coincide with the film’s release. Kasanoff called Threshold Entertainment “the next Pixar” and also banded together top animators from around the world to piece together a project with incredible ambition. The film was to be released in 2003.

So why is it that for a film this ambitious you probably haven’t heard a damn thing about it? Well, for starters, the film’s first immediate roadblock came in the form of a burglary in 2003 when hard drives containing the film, its animation, and its conceptual mockups were stolen. The animators and everyone assigned to the project needed to start from scratch (who stole the hard drives and where the footage is now will be something that will forever keep me up at night). Nonetheless, Kasanoff pushed on with the project, confirming a release date of 2005. But by now, Foodfight! had drummed up considerable controversy because of its premise, which took product placement to an entirely new level in a world where consumerism was already becoming more prominent than ever. While the idea seemed a bit novel in terms of ambition, the idea of marketing a film with dozens of product mascots unsubtly incorporated in it seemed to be an act of brainwashing children to buy, buy, buy.

Foodfight! never came out in 2005 and news of it became scarce and vague when it did manage to circulate. Tie-in books with the product began hitting some store shelves in 2007, despite no Television marketing whatsoever. The release date was changed several times before finding itself up for auction in 2007 for a surprisingly low $2.5 million, given its ambition and $65 million budget. Finally, the film came out over a decade after it first hit production, in October 2012. It received a very limited theatrical release in Europe and a silent DVD/video-on-demand release in the States, effectively ending one of the most mindbogglingly convoluted chapters in animation history.

Now the question begs an answer, what does Foodfight! look like in its final state? The simple answer is “hell.” This is a film that was clearly rushed upon being purchased at the aforementioned auction and spit into theaters, DVD, and video-on-demand outlets to finally clean the hands of those involved. The story concerns, as stated, a supermarket that turns into a playground for its product-mascots upon closing. The leader of this world is Dex Dogtective (voiced by Charlie Sheen), a crime-fighter who becomes incredibly suspicious of “Brand X,” a new line of products that are hitting store shelves. Dex and his gang of friends Sunshine Goodness (Hilary Duff) and Daredevil Dan (Wayne Brady) prepare to keep the supermarket in their hands, but Dex increasingly finds himself distracted by the likes of Lady X (Eva Longoria), a desirable woman who keeps trying to win Dex’s eye and the store manager finds himself dictated by Mr. Clipboard (Christopher Lloyd), who is enforcing Brand X.

To begin with, the animation is awful. This is animation that looks and moves like a broken Sims game on PlayStation. Never in my life did I think I’d call an animated film with so many colors and characters odious but that’s exactly what it is. While the characters appear in a three-dimensional state, the backgrounds almost look two-dimensional, and worst, are almost indistinguishable in terms of what they’re supposed to be. This is clearly animation that is not finished and was forced to be the finished product. Characters are very stiff when moving, have a peculiar coldness to their movements in addition, and many of them look grotesque and ugly. 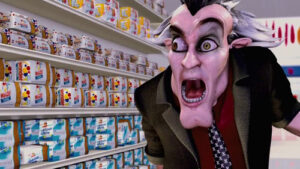 However, there is no character quite like Mr. Clipboard, who may be the most terrifying character in an animated film I have ever seen. For starters, he moves with an over-exaggerated walk-cycle where he stretches his legs out and sways back and forth to get where he needs to be. Then there’s his face, which would have traumatized me had I seen it if I was part of Foodfight!‘s target audience. His eyes stick out from his head, his face seems to be frozen with a mean, soul-penetrating stare, and having Christopher Lloyd’s inherently dark voice doesn’t help matters either. He is by far one of the most horrifying characters in any animated film ever and will haunt children’s dreams longer than the other memories of Foodfight! itself.

Then there’s the awful writing at hand here. One can sort of forgive the animation for looking terrible, seeing as, understandably, everyone’s hands just wanted to be cleaned of this film, but with twelve years of production and a forced rewrite thanks to a burglary, you would think the writing would be marginally polished. And yet, Foodfight! bears so much sexual innuendo it’s ungodly and very inappropriate for children (Daredevil Dan says to the sultry Lady X in one scene, “Oh Mamacita! Yo, sweetcakes, nice packaging! How about some chocolate frosting? I’d like to butter your muffin!”), Lady X boasts fetish-like lingerie as her primary outlets, orchestrating the fan-fiction version of her character, and characters speak almost entirely in grocery-store/food puns. There’s no characters here, despite there being like thirty that are recognizable. There are just empty, hollow animated creations programmed to spew something that is allegedly funny.

But seeing as Foodfight!‘s sole purpose is to bring all these mascots together for one film, why is it that they’re given such trivial roles? Most mascots get maybe three speaking lines, at most, while the ever-so-boring-and-bland characters of Dex, Lady X, Sunshine Goodness, and Daredevil Dan crowd the screen for so long. The fact that it rips off such classics as Casablanca and Gone With the Wind is obscured by the fact that it does it so poorly.

Foodfight!‘s existence and eventual outcome should be a warning to those who have an idea they see bold and ambitious opportunities for. Granted a burglary can’t really be blamed on part of the writers and directors but an awful script, a premise that seems to exist solely as a corporate byproduct, fourth-rate animation, and incredibly unforgivable and unnecessary sexual innuendos can be. The fact that Foodfight! is a bad film is the least of its concerns; it’s a morally, ethically, and visually reprehensible fiasco that scrapes the bottom of the barrel so forcefully that it’s tearing a hole in its base.

NOTE: Despite being available to rent on a variety of different platforms (including YouTube, mind you), Foodfight! is available to watch on YouTube, free of charge.