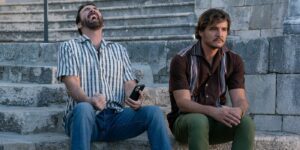 Between surfing the multiverse and emerging from it not thinking nihilism is the appropriate attitude in life, and now indulging in a love-letter to one of the most enigmatic actors of his generation, it’s been a banner month for cinephiles across America. But while The Unbearable Weight of Massive Talent is clearly made with undying affection for its star, it’s also a movie that’s frequently better in theory than it is an hour and forty minute sit.

Whether it’s going all the way back to the days when clips from Vampire’s Kiss or the once-popular “You Don’t Say” meme was an early-era social media staple, Nicolas Cage has always been one of the apples of the internet’s eye. His ability to segue between an Oscar-worthy performance to a totally bonkers, straight-to-video action flick has made him somebody who is tough to dislike even on his worst day. After turning down the idea several times, he finally committed to Tom Gormican’s passion project (cowritten by Kevin Etten). I am curious yet already weary of the memes it will soon inspire for the ceaseless Letterboxd crowd to devour and repurpose.

Embracing the meta screenplay, Cage stars as a washed-up, debt-ridden actor named “Nick Cage.” He also plays “Nicky,” his “devil-on-the-shoulder” 80s-era alter-ego, popping up intermittently as a conduit for internal dialog. Keeping with the connection to Cage’s own personal life, Nick Cage has an ex-wife named Olivia (Sharon Horgan), a makeup artist, and a teenage daughter named Addy (Lily Mo Sheen). Let it be known that the real-life Cage has two sons, and of all his ex-wives, there is no Olivia.

So, Nick Cage loses out on a promising role from director David Gordon Green and is plagued by $600,000 in back-rent. When all seems helpless, his agent (Neil Patrick Harris) comes through with another bold opportunity: $1 million to make an appearance at the birthday party of Javi Gutierrez (Pedro Pascal), a Nick Cage superfan.

Javi fawns over Nick’s movies; every single one from Face/Off to The Rock has a special place in his heart. Just when the two are bonding — in the form of crying over Paddington 2 — CIA operatives (Tiffany Haddish, Ike Barinholtz) reach out to Nick to let him know that Javi has kidnapped the Catalonian president’s daughter (Katrin Vankova) in order to disrupt the country’s upcoming election. They recruit Cage in hopes he’ll go full-on action-hero and bring down Javi.

The great stuff in Massive Talent is between the lines; the homoerotic bromance between Cage and Pascal is the peak of the camaraderie. Pascal came to play, commendably matching the energy of his co-star. The two build likable chemistry whether they’re wandering through Javi’s museum of Cage memorabilia or strung-out on acid convinced they’re being watched.

But much of Gormican’s movie feels one-dimensional. The script too often goes for the low-hanging fruit in the humor department, rendering its callbacks soulless. Not helping matters is the movie’s fluctuating tone. It seems as if Gormican wanted to encompass everything that Cage is as an actor, having him cycle from measured to manic within the drop of a hat. The difference between this happening in Gone in 60 Seconds is it at least there, the sudden switch felt authentic. The (unintentional) laughs contributed to the fun and heightened the unpredictability of otherwise generic movies. In Massive Talent, Cage’s high-strung range as a performer has become a trope, therein showing its own insincerity.

Alas, this is material that would’ve worked wonders for a five minute sketch. If Saturday Night Live‘s prerogative remained a commitment to comedic bits as opposed to its lazily satirical approach to whatever’s trending in pop culture or politics any given week, that platform would’ve served it the best. Instead, The Unbearable Weight of Massive Talent is somewhat ironically weightless. It’s amusing in the moment. It might provide the internet with morsels of “content.” But it won’t likely be remembered for much in the narrative nor creative department.

NOTE: The Unbearable Weight of Massive Talent is now playing exclusively in theaters.