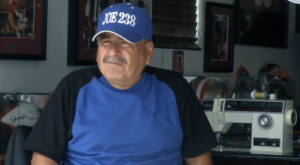 Joe238 tells the story of Joe Chairez, a Sacramento police officer who died from a brain hemorrhage on duty in 2000. His death received local media attention, and like every story, sooner or later, faded from the zeitgeist. It was onto the family to pick up the pieces in private.

The title of the documentary is a reference to Chairez’s badge number. It has become the moniker coined by his surviving parents, Jess and Theresa, as well as his then-fiancée Rebecca Cisernos, not only geared to keeping Joe’s memory alive but also affirming his impact, if posthumously.

At merely 59 minutes long, Joe238 covers a lot of ground. Chairez met Rebecca at the grocery store where she worked and proposed to her on Christmas. She recounts the story for which Chairez was famous in how during the police academy, he took tear gas to the face and brushed it off as not being that bad. There’s even video to prove his demeanor was mostly unfazed during the training. When Chairez suddenly passed, his parents, particular his father, Jess, weren’t keen on him being an organ donor. But they knew that’s what their son wanted, so they begrudgingly fulfilled his final request.

Joe238 is about a lot of things, but it primarily looks at Jess, whose life has pivoted significantly since the death of his son. Jess learned how to sew, mainly because he needed to do something with all the police and fire department badges from all over the country that take up several bins in his garage. He also learned that the Transplant Games of America — a society comprised of people who are or have loved ones who were organ donors — was a worthy cause where he could meet and grieve with others who have lost people close to them. The event’s games provide a healthy dose of competition; more significantly, they offer a welcoming outlet for those who have had a life-changing death occur.

My mother was an organ donor. I remember being inconsolably angry the day she died; for many reasons, but namely because my father and I received calls every hour about what we were going to do with her body. Let this be a news flash to anyone whose close family member is an organ donor: when they die, you must decide within a few hours of their death what you’re going to do with them. Although I understand why there’s such a sense of urgency to obtain any organs/tissue from a person before they “expire,” so to speak, I wasn’t much keen on having to make an executive decision about my mother’s body getting pillaged roughly four hours after first hearing she died.

In the end, it is somewhat comforting to know that some of her tissue was successfully donated soon after she passed.

Back to Joe238. One excellent aspect of the film and director Colleen Stymeist-Wood’s approach is she affords Rebecca ample time to tell her side of the story. Being the fiancée of the fallen officer, as opposed to the wife, doesn’t afford you much of a platform. It’s not out of spite, but the reality of the situation. One police officer — who pops up frequently to contextualize grief, feelings of anger stemming from loss, among other worthy asides that strengthen the film’s direction — explains that Rebecca was cast aside while Chairez’s parents got all the attention. It’s nobody’s fault, yet it didn’t make Rebecca’s life easier as she was expected to just move forward.

Joe238 is clearly a cathartic work for all involved. It succeeds in being both a deeply personal documentary, and one that provides enough broader takeaways about loss to aid those who have experienced such an unforgivable feeling. If I saw it a few years ago, I might’ve brushed some of its insights off as obvious. Having lived through a loss I’ll likely never understand nor “get over,” I see a lot of its points as truths.

In the end, the ones who are gone are at peace. The rest of us don’t have it so easy.

NOTE: At this time, there’s no clarity on when/if Joe238 will be available to be seen outside of the film festival circuit.