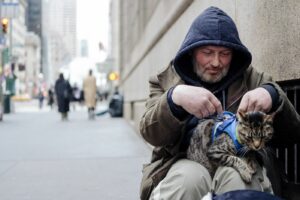 Mye Hoang’s documentary Cat Daddies is tenderly made and easy to like, especially if you’re a cat person like myself. Since a child, I gravitated towards cats. One must have great respect for an animal who, on one hand, will most likely be able to move on should anything happen to you. Not to mention one who looks around at life and decides to sleep through most of it — and is privileged to do so, unbeknownst to them.

There are less cynical reasons to love cats, many of which are addressed in Hoang’s film. One subject mentions how you need to put in work for a cat to trust you — one of the biggest reasons they’ll always be second in popularity to dogs. If you give most dogs a few treats and extend some pets, they’ll warm to you over the course of an afternoon. You can give some cats treats for years and they might just tolerate you. Long, long ago, humans and cats decided they could mutually exist in the company of one another. They could both trade off being independent and dependent in spurts, and such a bond still exists today.

Cat Daddies follows a handful of cat-owners, specifically males. This kind of representation is admittedly low on the list of marginalized groups in need of humanization, but as a single cat dad myself, it’s no less appreciated. One of the subjects we follow is a software engineer whose isolating work basically demands some cuddle and play-time with a four-legged furball. Another is a firefighter, whose department took in a stray cat they named “Flame,” who rides around on calls. Another is a trucker who found his own feline companion. A rare one I might add; he actually enjoys playing in the snow.

Then there’s David Giovanni, who is homeless in New York City. His closest companion is a cat named “Lucky,” and has been on the streets for two years. David is the centerpiece of the documentary. His insistence that Lucky remain in his care shuns him from most temporary shelters. He also gets some bad medical news, which puts greater strain on him and his daily life.

Cat Daddies does its part in normalizing images of affectionate males bonding with their feline companions, which counts for something. I don’t think it necessarily does enough to ensure a lasting impact, as it skirts a larger takeaway outside of the facts that most of us going in already know: cats are one of life’s greatest gifts, even when they’re running roughshod around your home or persistently going where they don’t belong. Just when you hope it digs deeper into the long-held societal belief that cat ownership is reserved for sad, single women firmly stuck in the current of middle-age, it double-downs on the cuteness factor again.

Some representation is ultimately better than none, I suppose.

NOTE: Cat Daddies is making its rounds on the festival circuit as it awaits wider distribution. You can stay posted on screenings and find the latest information about its release on the film’s official website.