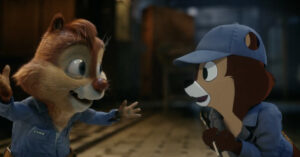 Kudos to Akiva Schaffer and writers Dan Gregor and Doug Mand for somehow convincing Disney to let them pillage their “Server-verse,” so to speak, and give us a superior version of Space Jam: A New Legacy.

Chip ‘n Dale: Rescue Rangers had a three-season run in 1989, although that was over in less than two years. It doesn’t bear the same level of nostalgia as Rugrats or Tom & Jerry. It’s simply a fine cartoon with limited fanfare in the modern day, making it a justifiable candidate for a reboot (or a “comeback,” as the poster bills this adaptation). While it succumbs to the same frustrating tendency that prevents most modern animated films from being great, it’s a dazzling burst of energy that’s smartly meta and faithful to its characters.

A Roger Rabbit-blend of live-action and animation, the prologue (re)introduces us to Chip and Dale (voiced by John Mulaney and Andy Samberg, respectively), who found each other in school; both outcasts in need of a friend. Their friendship turned into a collaborative partnership, which resulted in Rescue Rangers being a television hit. And then Dale, seeking to be more than second banana, landed his own show, “Double-O-Dale,” leading the two pals to feud and both shows being cancelled.

It’s been 30 years since. Chip is now selling insurance while Dale — who underwent “CG surgery” in order to be more marketable — is working the convention circuit, signing autographs and taking photos. He’s far less popular without his plus-one, however. The two are forced back into each other’s lives when a mutual friend is captured by Sweet Pete (Will Arnett), who has been kidnapping characters, changing their features, and selling them to Z-grade film studios (looking at you, Asylum!) so they can star in knockoff movies (think “Spaghetti Dogs” instead of Lady and the Tramp).

Chip and Dale link up with a cop named Ellie (KiKi Layne) in order to investigate the kidnapping of their pal Sweet Pete — who happens to be a middle-aged hasbeen-version of Peter Pan — has henchmen of his own in Bjornson the Cheesemonger (Keegan-Michael Key) and the Coca-Cola bear (Da’Vone McDonald). Not only do a litany of recognizable characters make appearances, but also “homages” to certain “types” of characters. Seth Rogen plays a motion capture Viking, a parody of the dead-eyed early-motion capture characters in Beowulf and The Polar Express. Fellow Rescue Rangers characters also make appearances. Then there’s a famously maligned version of a character, whom has gone on to rebound from an internet boycott and parlay the bad-buzz into something of a career. It’s a character too great to spoil.

Chip ‘n Dale: Rescue Rangers is buoyed not only by stylish, noir-esque cinematography (the work of Larry Fong, who employs a visual-scheme similar to that of Pokémon Detective Pikachu), but by an actual vision. The problem with many films of this breed (Ready Player One, Space Jam 2) is that they feel assembled by a boardroom of writers with too many ideas as opposed to filmmakers with defined parameters. Credit is due to Gregor and Mand, who give the pair of Disney chipmunks the “Phil Lord and Christopher Miller” treatment; Chip, Dale, and many supporting characters are given something to do, and thus many are made memorable.

But like most animated movies made in this day-and-age, not to mention dizzying displays of IP tomfoolery, Chip ‘n Dale: Rescue Rangers does get overly manic. Not every joke lands. Sometimes, the chaos on-screen is so busy, you wind up staring at the screen as opposed to actively watching what’s on it. There’s still an arresting quality to the camaraderie, elevated tremendously by the satirical edge brought forth by two-thirds of the Lonely Island (Jorma Taccone voices minor roles, but was busy filming the MacGruber series at the time).