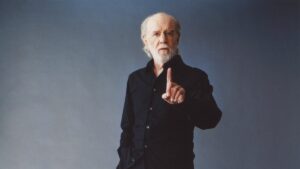 An assertion I’ve long argued is that America doesn’t have ancient history; it has pop culture. That’s the barometer of helping convey specific eras in this country’s history. In modern society, America also doesn’t have classical philosophers like Plato and Socrates. Instead, wisdom and perspective comes from many different voices, some of them comedians.

I’ll argue that George Carlin is the GOAT comedian to my dying day, mainly because he was so much than a comedian. He’s in a rare class of voices who have grown louder upon his passing. Clips of his routines still go viral on a regular basis. I must’ve seen his bit on “germs” three or four separate times during the pandemic. His acidic, painfully accurate rant about America’s owners, the government’s flagrant disregard of the American people, and the fallacy of the American Dream is still, to me, the greatest routine ever conducted by a comedian. It arrested me when I first heard it, years before I could even vote. It still makes me laugh and clench my fists at the same time.

Carlin’s life, career, brilliance, and everlasting wisdom is the subject of George Carlin’s American Dream, a three-hour documentary directed by Judd Apatow and Michael Bonfiglio. Apatow brings the same care and attention to Carlin as he did Garry Shandling in his two-part documentary in 2018. The first hour of the film explores Carlin’s youth, compiling a plethora of interviews and age-old archival footage that showed not a reflective comedian but a starving actor striving to emulate his idol, Danny Kaye. Before being one of many counterculture voices in the 1970s, Carlin tried to make it as a clean-shaven everyman on variety shows.

Then he found marijuana. Then came cocaine. Carlin grew out his beard and his entire persona changed. The drugs hurt Carlin and his lovely wife, Brenda, in significant ways, but it didn’t break them. One of their positive effects was it allowed Carlin to capitalize on his love for words and the English language. Carlin brought a musicality to his acts that sometimes involved him speaking a mile a minute. Sometimes, he was sloooow and elongated with his diction. His proclivity for mimicking specific sounds remains one of his most underrated qualities.

George Carlin’s American Dream has a lot of ground to cover: from Carlin’s famous “seven dirty words you can’t say on television” act, which got him arrested in Wisconsin and prompted a Supreme Court hearing over obscenity laws in America, to his “down years” in the late 70s when he became a parody of himself, and his career-rebound in the 1990s. The documentary examines Carlin’s ability to change with the times so as not to remain the dated comedian he once was. A deep thinker and an unbelievable wordsmith, he had genius in him. It simply took a few years to find it again. Sobriety certainly helped.

Chris Rock, Bill Burr, Jerry Seinfeld, Stephen Colbert, Jon Stewart, and more all offer context and personal anecdotes about how Carlin shaped their careers. This glowingly positive documentary impressively avoids hagiography thanks to the support and assistance of Carlin’s daughter, widow, and late brother, who all turn up and offer insights into his personal life — some hilariously on-brand, others heartbreaking.

I discovered Carlin at way-too-young-of-an-age. When he passed in 2007, my parents — who had the privilege of seeing him live — binged a marathon of Carlin standup specials that ran on HBO in the weeks after. I had an iPod at the time and a mother who was supremely lax in what I consumed. I downloaded all of Carlin’s audiobooks. I probably listened to Napalm and Silly Putty three times over. It wasn’t until I got older that I realized it was Carlin who, better than some of my teachers, pushed my critical thinking skills. Only the best of the best are able to do such a thing.

Now imagine a sixth grader talking to friends about how golf courses are a profound waste of space.

Apatow and Bonfiglio also bring a welcomed sense of style to the documentary. Most impressively, Carlin’s notes are displayed on-screen, but lines are put into focus one at a time, adding a degree of suspense whilst encouraging them to be digested. Somewhat haunting is some of the private recordings of Carlin practicing his routines or simply vocalizing nonsense. The depth of access makes this the definitive documentary in the Carlin canon.

George Carlin’s American Dream ends with Carlin’s aforementioned bit about the government being played over a montage of images and video of atrocities such as school shootings, instances of police brutality, riots, and the insurrection. It’s as great as anything I’ve seen in film this year.