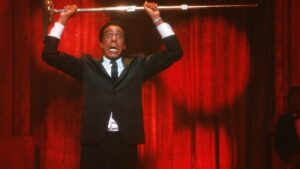 I was aimlessly flipping through channels the other night and stumbled upon an old episode of The Dick Cavett Show. Cavett was interviewing Richard Pryor about his new movie Jo Jo Dancer, You Life is Calling, which also served as Pryor’s first attempt at directing a feature. Pryor had directed his comedy special, Richard Pryor: Here and Now, two years prior; armed with something to say, he was game to try his hand at narrative filmmaking. Pryor is a changed man in the interview, and there’s one awkwardly funny, extended exchange between the two men when Cavett digs himself into a hole asking Pryor about white writers struggling to write black characters.

Pryor’s blunt reactions to Cavett’s questions are one of many reasons he’s an all-time great.

Tis pity that Pryor never got the opportunity to direct another feature. Jo Jo Dancer, You Life is Calling‘s box office returns were meager and its legacy is ostensibly muted. I live for movies and I never heard of it until seeing the Cavett interview this week.

In it, Pryor shows flashes of brilliance in his ability to show a lot with characters saying very little. Credited as director, co-producer, writer, and lead actor (in dual roles), he might’ve had a little too much control on Jo Jo Dancer, as the film’s comprehensiveness leads it too lacking the illuminating realities Pryor experienced when he finally realized his substance abuse was out of control.

Pryor, who is credited as “Alter Ego,” is Jo Jo Dancer, a very successful comedian. The audio of one of his bits plays over the opening credits, and it’s unmistakably Pryor. Cut to Jo Jo in his Hollywood home, phoning his drug dealer about a party he’s throwing while assuring he’s off drugs. He subsequently breaks bottles and bongs in a fit of rage before freebasing himself into the hospital burn unit — as Pryor famously did in real-life. He winds up with second and third degree burns covering most of his body.

While lying burned and disfigured in a hospital bed, Jo Jo’s alter ego separates from his body, looks down at his bandaged frame, sighs, and says, “Jo Jo, what have you done to us this time?” The alter ego then embarks on a trip back in time, viewing the memories of Jo Jo’s life that eventually led him to the burn unit.

We see Jo Jo come up in the nothing-town of Morton, Ohio, where his grandmother runs a whorehouse and his mother is one of the tricks. The affection he receives from his guardians is minimal, and sex and booze are contradictorily something to be embraced yet avoided. When his mother remarries, Jo Jo’s father becomes embittered, and their relationship frays the moment Jo Jo bolts to become an entertainer. There are many stumbles early; Jo Jo can’t quite master the art of delivery. Then one night, he’s had enough of hecklers and starts vulgarly dishing it back to them. It’s then he finds his voice.

Some of the movie’s warmest material is the makeshift family Jo Jo makes out of some eccentrics who work at a lowly nightclub run by wanna-be mobsters. He befriends a stripper named Satin Doll (Paula Doll), a veteran comedian in Johnny (Billy Eckstine), and a performer named Arturo (Art Evans), whose crippling stutter is part of his act. This stage in Jo Jo’s life comes to an end when he, dressed in drag, pulls a toy pistol on his bosses when he realizes paying talent is not in his superiors’ plans.

Jo Jo Dancer, You Life is Calling makes the typical mistake of most biopics in trying to tell the whole story, thus compromising the finer details — which really doesn’t work in a 93-minute runtime. Jo Jo’s first marriage to Dawn (Barbara Williams), a white woman, is predicated on both of them offering one another a new perspective — shown greatly when she’s shocked by the idea that she might know more about Malcolm X than he does. Their marriage seemingly dissolves after a coke-fueled rager at a potential agent’s bachelor pad, where Dawn engages in a threesome. The next scene, Jo Jo’s alter ego is confronting him about the time he met Michelle (Debbie Allen). The next scene, he’s ogling her while she dances at a club.

Pryor sort of trades details for raw urgency and textured moments, a daring move for a first-time feature director. That party is one of a handful of great scenes. Little direct dialog is exchanged between the characters. Jo Jo and Dawn are seen mixing, mingling, flirting, and then kissing other people, all while hopped up on blow and bottomless cocktails. At one point, they are visibly arguing but the music drowns out their dialog. Then the crash comes. Then a fight. It’s a scene capped off by terrific staging.

But Jo Jo Dancer, You Life is Calling never gets to the root of how Pryor’s creativity on-stage was aided (for the better, he thought) by the booze and pills off-stage. The framework involving the alter ego is sometimes as clumsy as the film’s title. Yet throughout the film, Pryor brings the same level of raw energy he brings to his comedy shows; he’s fearless and clearly in a cathartic state of mind. It’s a shame a lot of that catharsis didn’t make it into the final cut.

NOTE: As of this writing, Jo Jo Dancer, You Life is Calling is streaming on Plex TV, free of charge.

This was a great read!