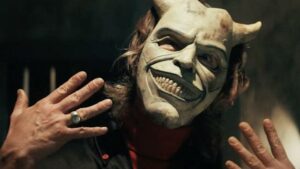 It could be said that all you need for a great thriller is a tall masked man, a dark room, and a young kid at the mercy of his captor. But distilling The Black Phone down to those parts would undermine the nuances that make it the effective chiller that it is.

The rare movie set in the 1970s that feels like it was made during that time — thanks to an acid-washed aesthetic heightened by pervasive film grain — Scott Derrickson’s latest takes place in a Colorado suburb. It could be called sleepy if not for a child abductor nicknamed “The Grabber” (Ethan Hawke) roaming the streets, luring kids into his van with a bundle of black balloons. Finney (Mason Thames), a clever but shy wallflower, tries to avoid the playground whispers about all of it. Most days, him and his young sister, Gwen (Madeleine McGraw), are just trying to survive their miserable alcoholic father (Jeremy Davies) and his propensity to use his belt for discipline.

Finney also has to avoid schoolyard bullies, and eventually has to bear the emotional weight when it appears as if his lone friend — Robin (Miguel Cazarez Mora), a kid as tough as a brick shithouse, who makes his entry in the film by beating the hell out of a bully twice his weight — has been taken by the Grabber. Soon enough, it’s Finney who is abducted and held captive in the man’s soundproofed basement. With no outside communication, his only lifeline is a disconnected phone. When it rings, it’s the voice of one of the Grabber’s victims, all of whom Finney knows. They provide details, sometimes cryptic ones, about his captor’s process.

Meanwhile, Gwen, who experiences vivid dreams that provide sparing details of the Grabber’s activities and whereabouts, aids local detectives in trying to find where the Grabber is keeping his victims.

Following in the footsteps of Sinister, Derrickson further solidifies himself as a tactician when it comes to laying the groundwork for intensely creepy premises. His stories prioritize well-crafted mystery over cheap horror. The Black Phone takes a good 30 minutes to set the table; we get a flavor for this small-town as well as a satisfying look at the tight-knit relationship Finney and Gwen share. Viewers anticipating a straight horror film might be let down by the lack of jumpscares. Derrickson and co-writer C. Robert Cargill (working off a short story by Joe Hill, Stephen King’s son) treat this story like a crime thriller, and make a damn good one at that.

Contributing to the visual personality is cinematographer Brett Jutkiewicz, particularly during Gwen’s dreams. Jutkiewicz filmed the respective scenes on 8mm. During these scenes, the fuzziness of the videography makes them feel all the more ephemeral; like a dream that happens so fast, you remember fragments of it when you awake and maybe find yourself reminded of it later in the day. Simply put, The Black Phone takes time to illustrate a mystery so compelling, you want to solve it — and you’re so immersed that you have no choice but to persist.

The film’s made even more arresting thanks to a fearless cast of young nobodies, many of whom destined to be somebodies in due time. 14-year-old Mason Thames is mature beyond his years, aided by writing that shows the maturation in his fledgling confidence. He shares two scenes with Czarez Mora’s Robin that are beautiful. It reminded me of the tough kid(s) at my school that ostensibly saw me as safe or at least “cool” enough to talk to. Madeleine McGraw does some heavy lifting whether she’s called upon to be a ball of sass in the face of detectives, or emotional and vulnerable when faced with the belt of her father. I almost wonder how the film would’ve played out if she were the one who was kidnapped.

At the center is Hawke, who might be entering the villain stage of his career. Concealed by a two-piece mask, the veteran proves he can instill chills solely through his posture and voice. His banter with Thames is so good, I wanted more of it. The film sometimes prioritizes clutch phone-calls to a fault, and the spooky supernatural element does wear a bit thin by the end. But just as you feel like The Black Phone is too married to what might be a cheap concept, it entraps you with its conservative reveals and slowburn storytelling — two things that never go out of style.

NOTE: The Black Phone is now playing exclusively in theaters.

I like your point of view and review young Ebert