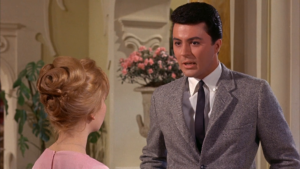 To accentuate the positives of Gidget Goes to Rome, the third installment in this unlikely franchise, the continuity is in place to make this sequel not feel entirely divorced from its predecessors. Paul Wendkos is back in the director’s chair. Ruth Brooks Flippen has a screenplay credit (this time alongside Katherine Albert and Dale Eunson). And James Darren not only reprises his role as Moondoggie, but he also evokes Dean Martin on the film’s theme, “Gegetta,” which is a reference to how Italians would translate “Gidget.”

But alas, Gidget Goes to Rome is not “gegettable,” as Darren’s song would suggest. In fact, in some ways, it’s a regrettable conclusion to the original trilogy, which was then followed by three TV movies and two separate TV series.

For the third Gidget movie, we’re onto our third Gidget, this one played by Cindy Carol, whose short-lived acting career only spanned 11 years. Good luck finding any information about Carol in the present. I spent a good amount of time procrastinating on this review trying to unearth a morsel of information about where the 77-year-old Carol is today, or what she’s up to. The most I could scrounge up was a 2005 photo of her in Malibu welcoming female athletes to the 2nd Annual Rip Curl Malibu Pro. Beyond that, she might as well be Bambi Woods. Here’s hoping she’s healthy and doing well.

Carol’s Gidget is now college-aged and vacationing in Rome for the summer alongside Moondoggie and their crop of friends. In charge of chaperoning this bunch is Aunt Albertina (Jessie Royce Landis), an eccentric old lady with an assortment of wigs who probably would go on to believe Carly Simon’s song is about her. Moreover, Gidget becomes jealous when Moondoogie takes a liking to the crew’s tour-guide, the drop-dead gorgeous Daniela (Danielle De Metz). At the drop of a hat (or, rather, a water pitcher), Gidget finds herself in the company of Paolo Cellini (Cesare Danova), a dignified writer who wants to do a profile on a cute American girl’s first time in Rome.

So, right about the time Moondoggie’s lust for Daniela has him considering breaking it off with Gidget is when Gidget starts to fall for Paolo, who wines, dines, and even takes her to an opulent cocktail party (admittedly, a funny parody of La Dolce Vita, which is even referenced by name). Gidget will also run into problems with the law, most notably when she unknowingly sneaks into a restricted area of an art museum and begins assaulting a statue.

Sidebar: there’s a seriously weird occurrence throughout Gidget Goes to Rome that begins during that very scene. Whenever the camera zooms on an Italian sign, the film freezes and a narrator, speaking in a hushed voice, says “translation” before translating the Italian text. It happens initially when we see the sign at the front of the art gallery, which translates to “entrance forbidden.” This odd freeze-frame happens thrice in that sequence and again later in the movie. I’m aware it was 1963, but couldn’t subtitles be employed as opposed to stopping the movie dead in its tracks?

Either way, Gidget Goes to Rome is a middling affair. Moondoggie is entirely unlikable the second his wandering eyes land on Daniela, and then when he subsequently acts dumbfounded when Gidget takes offense. The supporting characters — both Gidget’s girl-friends and Moondoggie’s clean-cut crew — are flat; unlike in Gidget Goes Hawaiian, they contribute nothing to the story and are simply shuffled along to the next set-piece. Being that the film was shot on location in Rome, Enzo Barboni and Robert Bronner’s cinematography gives the production added authenticity, as they convey more than a couple beautiful shots of the Eternal City.

If Gidget Goes to Rome is memorable for one aspect, it’s that this was the seventh film scored by the legendary composer John Williams. Couple that with the attractive photography, you could repurpose select scenes into a travelogue — a shorter, perhaps more enjoyable endeavor.

NOTE: As of this writing, Gidget Goes to Rome is available to stream on Tubi, free of charge.