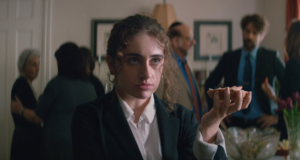 Emma Seligman’s Shiva Baby is plagued with anxiety in the best possible way. A taut, tight 78-minute dramedy that plays like a horror film, thanks to Ariel Marx’s staccato score, Seligman’s debut takes place at a shiva, a post-funeral Jewish service. Who exactly died? Who can say? Our protagonist Danielle (Richard Sennott) has too much to process and not enough time to do so as the opening scene has her leave her sugar daddy’s (Danny Deferrari) apartment in a haste in order to make the service.

From there, Shiva Baby, based on Seligman’s short of the same name, centers around Danielle reuniting with various members of her family in the most oppressive environment imaginable. Her parents, the smothering Debbie (Polly Draper) and the forgetful Joel (Fred Melamed), and their constant fussing don’t help set the mood. Almost immediately after they arrive, Danielle is faced with questions regarding her post-college plans and love-life, as if she’s in a post-game press conference. At first, Danielle thinks her biggest obstacle is going to be avoiding her ex-girlfriend, Maya (Molly Gordon), who has her heart set on law school. Maya is flirtatious yet prickly towards her former partner, not at all easing Danielle’s anxieties. Her discomfort reaches critical mass when she notices that her sugar daddy, Max, is also at the party, along with his wife, Kim (Dianna Agron), and their infant daughter.

Throw all of that into a pot, drop it on the stove, and ignite a slow fire underneath it — that’s what you get with Shiva Baby, which moves like a potboiler ready to explode. The end result is a painfully funny, claustrophobic work of brilliance from a 24-year-old NYU graduate, who knows a thing or two about how aesthetics and pacing play into the finest of works. Shiva Baby segues so beautifully between interpersonal conversations that it’s easy to miss all the heavy-lifting Marx’s music and Hanna A. Park’s editing is doing. It’s in the carefully time synths and tightening camera-angles that Seligman’s film makes us feel the palpable awkwardness. Danielle’s glances across the room, sometimes to a crowd of people or the prying eyes of a relative, place us in her POV. Subtle blur makes us feel a fading sense of reality and a feeling of dizziness brought on by overstimulation. The few times Danielle leaves the party and goes outside, we can almost taste the fresh air, mercifully so.

As hyper-focused as Seligman is on Danielle, she doesn’t skimp in giving us rich tastes of other couples who populate a crowded home during this shiva. The contention between Max and Kim is slow to brew; it’s already bad enough that Kim, who isn’t Jewish, is viewed as a pariah by the other attendees, more-so for the fact that she has a baby in tow. Isn’t that the funny thing about Jewish families? Parents are so desperate to know when you’re going to have kids, but God forbid you bring them to a shiva for a couple of hours.

Shiva Baby has a lot in common with other works, but not in a derivative sense. Its aesthetics reminded me of Disobedience. Danielle and Maya’s love-hate dynamic — at least when the latter overpowers the former — lightly echoes the friendship between Molly and Amy in Olivia Wilde’s beautiful Booksmart. There’s more than enough evidence to suggest their friendship-turned-romance was as strong as theirs at one point. Finally, the film’s unrelenting tension recalls Uncut Gems. Beyond all comparisons, Seligman permits Danielle the luxury of being messy and unsure of herself. While she might not have it all figured out in the moment (less so with her oppressive family at her throat every 15 minutes), the film’s climax suggests that some semblance of security and comfort is headed her way. She deserves it in the same way Seligman deserves a long, fruitful career.