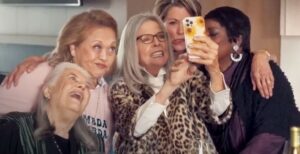 A miserable miscalculation — one that makes 95 minutes feel double the length even during the first 30 minutes — Mack & Rita is an assortment of tacky screenplay devices in search of a shred of wit. How ridiculous it makes Diane Keaton look is already a crime, but how it makes caricatures out of everyone save for the two titular women proves it has hardly any purpose other than to waste your precious time.

Written by Madeline Walter and Paul Welsh (who both worked on Brooklyn Nine-Nine), the film revolves around 30-year-old Mack (Elizabeth Lail), an eccentric homebody who grew up idolizing her grandmother’s carefree way of life. Instead of partying, Mack would much rather be at home writing, napping, and doing things on her own time. She did publish a book a while ago, but now her agent only calls her to bark orders and demand she continue to serve her clients with “#ad” Instagram posts.

So on that basis alone, it makes entirely no sense why Mack’s close circle of friends are the anthesis of her being. They are your average young women who enjoy mimosas, partying, and tracking down surprise Bad Bunny concerts. While out with them on Carla’s (Taylour Paige) bachelorette party, Mack looks longingly at a couple of old ladies who are having an outdoor brunch across the street. “I want to be like them,” she whines, leading any sane person to question why the hell this group would hang out with her in the first place.

Seeing an opportunity to get her wish and lie down, Mack springs for a turn at a past-life regression tent in the middle of a Palm Springs parking lot, run by a clear huckster (Simon Rex). She climbs into a broken old tanning bed and emerges as a 70-year-old woman (Diane Keaton), who I presume is supposed to be her in 40 years. Either way, this “30 Going on 70” gag leads to some obligatory freaking out, both from Mack and Carla, a welcomed seat at Carla’s mother’s (Loretta Devine) wine club, and a lot more sitcom antics.

What would a lame comedy be without a romance? As an elderly lady, Mack is afforded an opportunity to get to know her cute neighbor and dog-sitter Jack (Dustin Milligan), who, *gasp*, lives to be a hermit just like her! Because of course two infuriatingly attractive old souls just so happen to live next door to each other, and she somehow trusts him enough to watch her dog despite not knowing the bare minimum about his personality. Most illogical.

Mack & Rita is cut from a similar cloth as Keaton’s latest ventures, such as Book Club and Poms. They are movies for our moms, and oh how we wish they, at least occasionally, displayed better taste. In a landscape saturated by rebooted IP and indestructible, spandex-clad heroes, the middle-aged crowd has definitely been at a disservice at the multiplex for many moons. Mack & Rita isn’t remotely close to an ideal option.

Walter and Welsh seem less motivated to use this premise to get to the root of Mack’s inner-desires — not so much to be left alone but to live a life dictated by her own terms — and instead compelled to shuffle the ordinarily charismatic Keaton around from location-to-location so she can be woefully out of place. One of the worst scenes in any movie I’ve seen this year comes when her agent calls and insist Mack make good on her commitment to visit and “Gram” a Pilates class. Of course, it ends with the septuagenarian Mack almost breaking a hip.

Mack & Rita was directed by Katie Aselton, an infrequent soul behind the camera, who made both a compelling, mumblecore thriller in Black Rock and the decent-if-forgettable comedy The Freebie starring Dax Sheppard. This is her biggest break and it’s a real pity — out of all the films and shows she’s done, many of which very good — this mid-August trite is likely to be the one most people see. Hopefully, they’ll forget rather quickly too.