However you quantify it, one thing is for sure: Scott Mann’s Fall is a late-summer thrill. Movies with a single setting are some of my favorite to seek out. By the very nature of their premise, they pull suspense — and, if we’re lucky, character development — to the forefront. I’ve watched full-length movies featuring characters stuck in an elevator, ATM booth, phone booth, a ski-lift, and a coffin, buried alive.

In a strange way, it’s as if watching these movies gets me to confront some of my fears. I’m petrified of heights. I struggle to look down from a three-story parking garage. I could think of many unseemly and/or painful activities I’d try before ever thinking of climbing a rickety, rusty 2,000-foot TV tower. I don’t care how incredible the view at the top is. I’ll settle for pictures and first-hand accounts from the comfort of my couch.

Fall opens ala Free Solo, with a trio of thrillseekers — Becky (Grace Caroline Currey, Shazam!), her boyfriend Dan (Mason Gooding, 2022’s Scream), and Hunter (Virginia Gardner, 2018’s Halloween) — scaling a mountain of some kind. One thing leads to another and Dan plummets to his death. Since then, Becky has been drinking, crying, and medicating herself on the path to suicide. She’s become a sullen shut-in, ignoring the pleas of her father (Jeffrey Dean Morgan) to seek help. (Re)enter Hunter, whose sassiness and desire to see her friend overcome the worst thing to happen to her coerces Becky into climbing an out-of-commission TV tower in the middle of the California desert. Hunter convinces Becky, who hasn’t climbed since the accident, that this is not only a golden opportunity at closure and perseverance, but an ideal way to honor Dan and spread his ashes. Armed with water, a selfie-stick, and a drone, Becky composes herself for the endurance test and Hunter puts on a revealing top. “Tits for clicks,” she tells her friend.

Not without some panic, the two manage to reach the top of the tower to snap some selfies and praise their accomplishments. But when Becky tries to climb down, the rusted bolts of the ladder come loose and crash onto the desert sand below, leaving the two women stuck at the top with no cell service. Their bag of supplies falls a good 50 feet and lands on satellites attached to the structure. They’re stuck. And in no time, vultures begin circling.

Fall has its fair share of platitudes about facing fears, living life, giving the middle finger to death, and so on and so forth. Those Hobby Lobby-esque musings are made at least palatable thanks to two engaged performances from Currey and Gardner, who are colored believable thanks to solid interpersonal dialog that goes beyond shrieks and tears. Their friendship is predicated not merely on defying death, but their affectionate teasing and clear concern for one another. I’ve seen enough of these movies to be stuck with some unruly characters. It’s refreshing that Becky and Hunter are both flawed but likable.

Fall admittedly sold me on premise alone, but kept me intrigued thanks to a lot of deft aesthetic choices. The cinematography — the work of a Spanish cinematographer known as MacGregor — is beatific and haunting. One stand-out shot in the evening is a long-shot of the top-half of the tower, where the sun’s position renders Becky and Hunter as indistinct silhouettes. There are many others too, including a harrowing shoe-drop and some funky camera angles that capture every inch of this unstable needle-point to the sky. The film was shot in IMAX format, which prevents it from looking cheap and artificial. MacGregor deserves more credit than he’s liable to get. 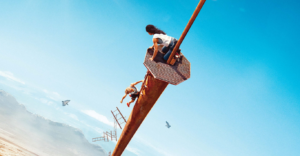 Mann’s depictions of events during the ladder-climb sequence echoes Final Destination in both foreshadowing and ominousness. His camera-work emphasizes details such as aging bolts giving way to weight as well as consistent spatial awareness. For some, certain shots might be vertigo-inducing. I watched this on the small-screen; a theater-screen changes everything.

Mann’s script (written with Jonathan Frank) also smartly moves away from turning Becky and Hunter into damsels. They’re confident and fearless women, and the screenplay shows us that rather than tell us ad nauseum. Save for a few moments of incredulity, the film plays things straight, especially given the experience of the two women.

Already at a disadvantage due to a small budget, Fall was somewhat left out to be prodded the day before its release when news of Mann’s company resorted to “deepfaking” the actors’ faces and artificially redubbing F-bombs in order to achieve a PG-13 rating. I report back to say that the end result doesn’t make these changes particularly noticeable. The film still pushes the envelope of its rating given the words that are said. You could say the film is as resilient as its protagonists, even if it should give all thrillseekers a pause.